Tetrahedra with a twist

A year ago, when I was playing with Geomag models of sphere clusters, I stumbled upon this curious object, a helix assembled from tetrahedra linked face to face:

I certainly wasn’t the first to discover it. A. H. Boerdijk described the structure in 1952; notable later contributions and commentaries came from J. D. Bernal and H. S. M. Coxeter. (See references below.) Buckminster Fuller also had something to say on the subject, and he suggested a name: the tetrahelix.

As far as I can tell, the tetrahelix was not known to the ancients, although there is nothing about its geometry they could not have understood. Perhaps they overlooked it because Aristotle believed that regular tetrahedra could be packed together to fill all of three-dimensional space—a feat that would make this mere linear packing rather unimpressive by comparison. But Ari was wrong about tetrahedral tesselation; it can’t be done. The closest you can come is a packing of alternating tetrahedra and octahedra, as in the Geomag-like roof truss in the photograph below.

Roof truss in the atrium of the Washington Wardman Hotel, photographed during the 2009 Joint Mathematics Meetings. 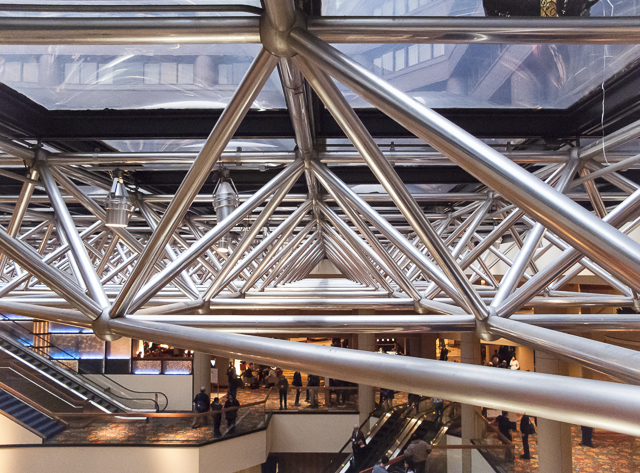 It turns out there’s a direct connection between the roof-truss structure and the tetrahelix. One way to construct a tetrahelix is to start with a line of alternating tetrahedra and half-octahedra (the latter having exposed square faces). Then you squeeze and twist each square face until it becomes a rhombus that can be spanned by a new strut (red in the lower panel below), creating two new triangular faces. Presto! The tetrahelix appears. 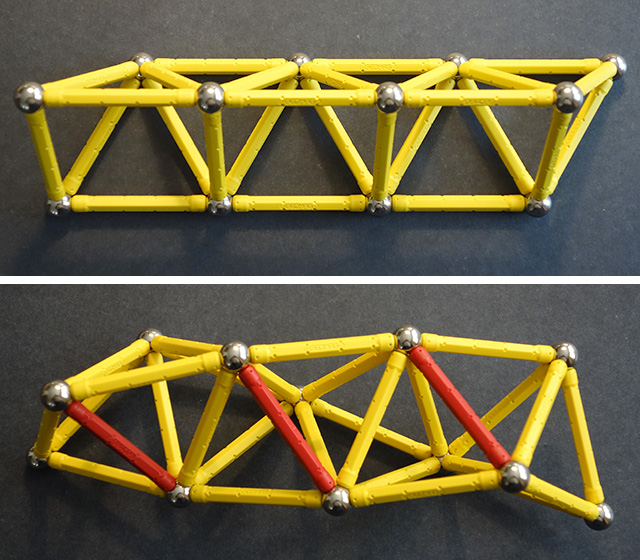 Remarkably enough, after all this twisting and smushing, the helix still extends along a straight line. All the vertices of all the tetrahedra lie on the surface of a right circular cylinder. The center line of that cylinder does not pass through the centers of the individual tetrahedra, but it does act as an axis of symmetry for the helix as a whole. 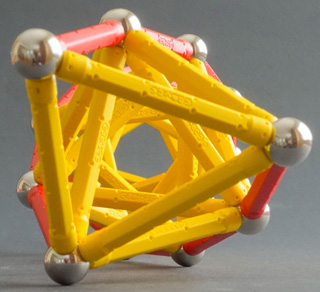 The symmetry in question is a screwy one: a translation combined with a rotation. Suppose you have an infinitely long tetrahelix assembled from tetrahedra of side length 1. Then if you slide the entire structure along its axis by a distance of \(1/\sqrt{10}\) (\(\approx 0.316\)), and also rotate it around the same axis through an angle of \(\arccos -2/3\) (\(\approx 131.8\) degrees), the new state is indistinguishable from the starting configuration. Note that the rotation angle is irrational. As a consequence, the helix is aperiodic. When you look along the bore of the helix, you will never see two vertices lined up one behind the other.

The tetrahelix is a chiral structure: It comes in left-handed and right-handed variants, as shown in the photograph below. 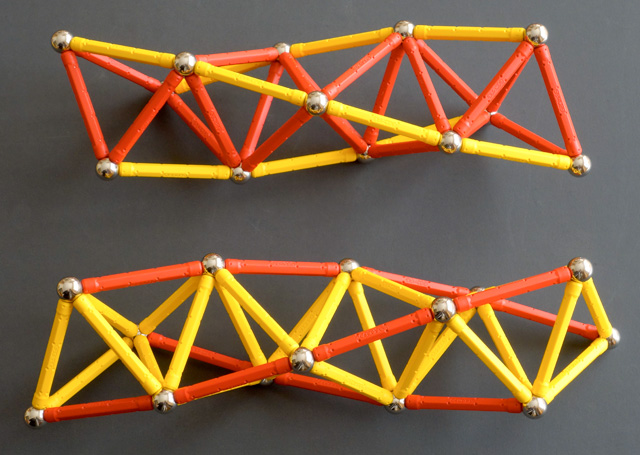 Playing with these two Geomag models, I began to wonder whether they could be joined end-to-end—or in other words whether a tetrahelix can change its handedness in midstream. The answer, as shown below, is yes. A helix peacefully curling to the left can abruptly shift to a right-handed way of life—but the price of becoming ambidextrous is a big kink in the chain.

You can even create a tetrahelix that changes direction every third tetrahedron (the smallest possible interval). The result (below) is no longer a helix at all but a weird sort of bridge with an arched spine and two zigzag rails. If you extend the arc further, will the two ends meet to form a closed loop? I don’t have enough Geomags to answer that question.

Down through the ages, quite a lot of mystificatory cruft has attached itself to the Platonic solids. Plato himself argued that the universe is built of regular polyhedra, which he identified with the classical elements. (The tetrahedron was fire, because of the sharp points.) Then there was Kepler’s Mysterium Cosmographicum, where he tried to explain the orbital diameters of the planets in terms of nested polyhedral shells.

Mouseover to animate. Failing that, click to open in a new tab or window.

Bucky Fuller contributed his own share of overwrought polyhedrolatry. In Synergetics he describes the transformation of an octahedron into a chain of three tetrahedra, as in the animation at right. His account of the geometry is straighforward, explicit and accurate. But he doesn’t stop with geometry. He attributes to this rearrangement of edges and vertices a much larger significance:

Symmetric matter has been entropically transformed into asymmetrical and directionally focused radiation: one quantum of energy has seemingly disappeared. When the radiation impinges interferingly with any other energy event in Universe, precession recurs and the three-quantum electromagnetic wave retransforms syntropically into the four-quantum octahedron of energy-as-matter. And vice versa. Q.E.D.

A few paragraphs later, Fuller introduces the tetrahelix with another inscrutable rhapsody on geometry and physics:

With this fourth, invisible tetrahedral addition the overall triple-bonded tetrahedral array becomes either rightwardly or leftwardly spiraled to produce a four-tetrahedron tetrahelix, which is a potential, event embryo, electromagnetic-circuitry gap closer. Transmission may thereafter be activated as a connected chain of the inherently four-membered, individual-link continuity. This may explain the dilemma of the wave vs the particle.

I think I understand the temptation to see deep meaning or even magic in the way the most symmetrical solids arrange themselves in space. The building blocks are simple, the patterns they form wonderfully intricate and precise. It looks as if there’s something very special about all the dimensions and angles in these structures, so that the slightest change would ruin everything—would tear the very fabric of the universe.

Well, maybe. But in the case of the tetrahelix I’d like to argue that this object—however handsome and intriguing it might be—is not a freak of nature or a miracle. Its existence does not depend on some exquisitely refined and fragile property of the tetrahedron. In support of this notion I offer the exhibit below.

Let’s call this structure a pentahelix. If you focus on the three strands of red links, they appear to follow the same paths as those in a left-handed tetrahelix. Thus you might guess that what we have here is just a tetrahelix “decorated” with some extra bumps along the perimeter. But that’s not what you’re looking at; there are no tetrahedra at all in this construction. Instead, the component parts are pentagonal dipyramids. This polyhedron looks at first glance as if it might consist of five regular tetrahedra arranged around a central axis—and in Aristotle’s world it might indeed be built that way. In our universe, however, the lengths and angles aren’t quite right. To fill 360 degrees with five equal wedges takes 72 degrees per wedge; the angle between faces in a regular tetrahedron falls short by about a degree and a half. Thus the pentagonal dipyramid is a structure fundamentally different from anything built of tetrahedra. The vertex coordinates are full of \(\sqrt{5}\), whereas the tetrahedron is all about \(\sqrt{3}\). Yet, in spite of these differences, the pentagonal shapes can be knitted together to make a fine-looking helix—slightly less symmetrical than the true tetrahelix, but a recognizable member of the same family.

The fact is, helices seem to be very robust and easy to produce. They’re everywhere in nature. For example, the collagen protein (illustration at right), is a three-stranded helix much like both the tetrahelix and the pentahelix. Collagen genes have accumulated thousands of mutations while still producing a functional molecule; thus an immense number of different amino acid sequences (and slightly different geometries) all give rise to very similar triple helices.

Funny world we live in. If you want to design an object that will tile all of three-dimensional space, the requirements are stringent. But helices aren’t so finicky. When you stack symmetrical objects along one axis, it seems hard not to make a helix.

Update 2013-11-25: I am late to the party with this note, but for the benefit of those who have not been reading the comments, let me point out that the question I raised about the “arched bridge”—Can it be extended to form a closed ring?—was asked and answered long ago, but that fact hasn’t stopped ingenious folks from having fun with it recently.

As explained in a comment below by Stan Wagon, the question was posed in 1957 by Hugo Steinhaus in the problem section of the Polish journal Colloquium Mathematicum. (A notation there suggests the matter may have been discussed a year earlier in The New Scottish Book.) A proof that no such closed ring of tetrahedra can exist was published two years later by Stanisław Świerczkowski, also in Colloquium Mathematicum.

Not to be deterred by a mere proof, Michael Elgersma and Wagon have produced a lovely tetrahedral torus, printed in genuine 3D by Shapeways: 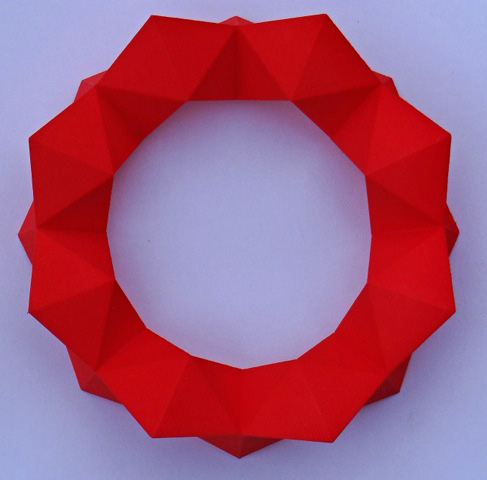 For the secret behind this magic trick, see the not-yet-published paper Closing a Platonic Gap by Elgersma and Wagon. Comments below by Nicholas Mecholsky and Robert Mathieson include links to other constructions.

Read more about it:

7 Responses to Tetrahedra with a twist