Yet another spam update

Posted on 7 February 2010 by Brian Hayes 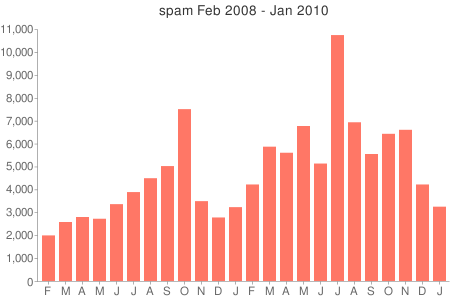 It seems the great spam tide of 2009 is ebbing. The graph records numbers of spam messages per month received by my email accounts; obviously this is just a personal tally and your milage may vary. The percentage of Russian-language spam in my inbox has fallen off somewhat, from more than half last fall to less than 40 percent in January. (For context see my earlier bit-player spam reports: Aug 2009, May 2009, Mar 2009, Nov 2008, Oct 2008, Jun 2008. Also two American Scientist columns: Jul-Aug 2007 and May-Jun 2003.)

I would also like to draw attention to a recent article on the economics of spam: “Spamalytics: An Empirical Analysis of Spam Marketing Conversion,” by Chris Kanich, Christian Kreibich, Kirill Levchenko, Brandon Enright, Geoffrey M. Voelker, Vern Paxson and Stefan Savage, Communications of the ACM 52(9):99-107 (available online if you or your library is a subscriber). (Preprint link, thanks to Arvind Narayanan in the comments.) Kanich et al. adopt a clever and mildly controversial strategy: They parasitize an existing spam botnet and alter outgoing emails so that embedded links point back to the investigators’ own web servers, rather than those of the spammers. They write:

Using this methodology, we have documented three spam campaigns comprising over 469 million emails. We identified how much of this spam is successfully delivered, how much is filtered by popular antispam solutions, and, most importantly, how many users “click-through” to the site being advertised (response rate) and how many of those progress to a “sale” or “infection” (conversion rate).

Of the 469 million messages, 347 million were part of a campaign advertising pharmaceuticals. The bottom line: 28 “sales” (no money actually changed hands, and no products were delivered) with an average purchase price of about $100. This is a conversion rate of less than 1 in 10 million, which leaves some doubt about the profitability of the operation. Kanich et al. note that spam-for-hire services would charge roughly $25,000 to send 350 million emails, an order of magnitude more than the revenue generated in this campaign. Yet the mere continued existence of spam argues that the actual costs must be much lower. Kanich et al. speculate that the spammers are a vertically-integrated enterprise: They own both the botnet and the pharmacy.

Finally, I want to update my comment on comment spam. Three months ago I installed the Akismet filter to intercept spam comments submitted to bit-player. The filter has been performing fairly well, blocking about 200 spam comments so far, letting a dozen or so slip through, and falsely imprisoning a couple of legitimate comments. (Advice to commenters: Avoid ALL CAPS.)

Looking through the archive of impounded messages, I am more perplexed than ever about the social and economic basis of this phenomenon. The URLs that constitute the payload of the spam point to a weird miscellany of topics. Someone out there thinks that the readers of this blog are interested in hypnotism, in bathroom faucets and shower enclosures, in garage doors and currency conversion. Most of all we are a musical bunch: Fully a third of the spam comments promote merchandise related to pianos.

Unlike email spam, the comment spams are not generated by an automaton; there are living human beings at the other end of this communication channel. And apparently the spam writers are not hired merely for high-speed, wholesale captcha-solving. In many cases there is ample evidence that the commenter has read the article and understood it, and may even have something interesting to say about it.

It occurs to me that this circumstance gives me an opportunity to open a dialogue. So I now address myself directly to the comment spammers: If you are reading this post because you’ve been hired to plant comments and URLs here, or if you’re doing it for your own commercial gain, I have a proposition for you. Please leave a comment attached to this post, explaining what you’re doing and why–and, if possible, for whom. Tell us what a successfully planted link is worth, and how much you get out of it. If your comment is sufficiently interesting and informative, and if it seems genuine, I’ll let it through the Akismet filter, and you’ll have your chance to sell my readers a piano or a garage door. (This offer applies only to comments attached to this article, and I’ll be the sole judge of what’s interesting, informative and genuine.)

If you’d rather communicate privately, send me an email at brian@bit-player.org.

2 Responses to Yet another spam update