Posted on 2 November 2008 by Brian Hayes

Wall Street may have had its worst month ever, but the spam market has been booming. As faithful readers know, I’ve been tracking my incoming spam for several years now. (If you’re utterly sick of reading about this strange obsession, please forgive me. Also please let me know.) 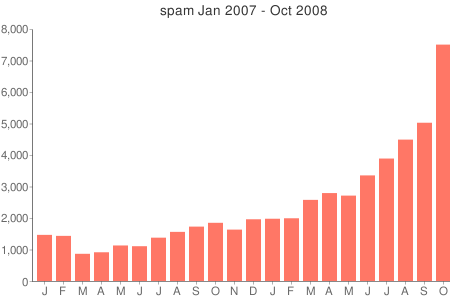 As the graph suggests, this past month has produced an extraordinary uptick. October shows a 50 percent increase over September, with a total of 7,506 messages. Both the rate of increase and the absolute number of messages set records. I’ve seen roughly a tenfold increase since the low point back in May of 2007 (when I believed that we might soon be seeing the end of the spam phenomenon). The preponderance of Russian fare in my spam diet also continues: 4,694 of the month’s messages (or 62.5 percent) used a character encoding for the Cyrillic alphabet.

Update 2008-12-03: Well, it looks like the spam market has finally crashed. After five months of accelerating growth, my spam intake collapsed in November. I got a total was 3,492 messages, less than half the October count and sending me back to levels not seen since June. 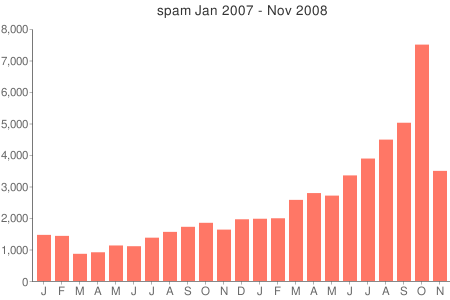 The proportion of Russian spam has also fallen, though only slightly: 1,575 of the messages (45 percent) arrived with a Cyrillic character encoding.

News reports suggest one possible reason for the sudden downturn in spam volume: On November 11 an ISP named McColo was isolated from the rest of the Internet. Unidentified customers of McColo are accused of using servers there to control spam-spewing botnets. Can this event account for the lighter load on my spam filter? Here’s the daily log: 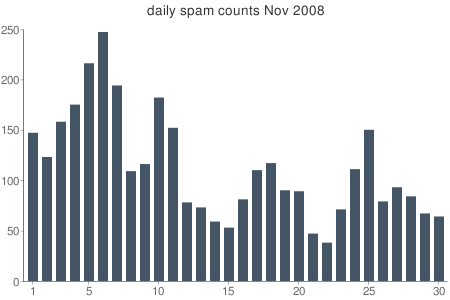 There is indeed a noticeable dropoff after the 11th. However, it’s worth noting that volume was already well below the October average of about 240 messages per day.

Update 2009-01-01: The volume of spam in my inbox is falling faster than the price of light sweet crude. My December total is down more than 60 percent since the October peak, to 2,774 messages. The graph below gives a wrap-up for a full two years. 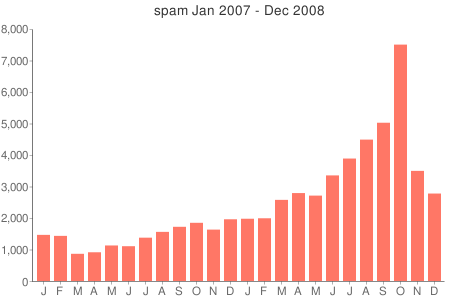 What drives these tides in the flow of Vi@gra ads and offers of replica \/\/atches? The cycles of boom and bust are even more mysterious than those of the global economy. All I can say about this event is that it appears to be a general downturn, not a collapse of some particular category of spam. In particular, the distribution of languages remains fairly stable. In December 49 percent of my spam carried one of the Cyrillic character encodings, so somebody out there still thinks I’m a likely customer for Отчаянные домохозяйки.