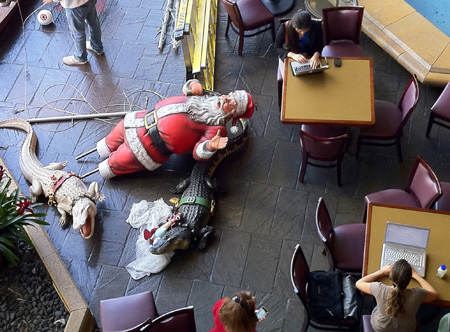 Santa and alligators in the hotel lobby: This must be New Orleans. Laptoppers and iPhoners paying no attention whatever: This must be the Joint Mathematics Meeting.

It was a good meeting. I learned stuff. My take-home impression: The world of mathematics is thriving, and everybody seems to be having fun. There’s adventure to be found if you go seek it.

A week later, though, as I mull over the lectures I heard and try to make sense of my notes, not all my thoughts are so jolly and upbeat. One subject in particular leaves me feeling vaguely uneasy, and I can’t seem to let it go.

The seed of doubt was sown in the annual Current Events session organized by David Eisenbud. In this special series of talks, always one of the highlights of the meeting for me, “the speakers do not report on their own work, but survey some of the most interesting current developments in mathematics, pure and applied…. Excellence in exposition is a prime consideration.”

The final talk of the session was given by David Nadler of Northwestern University; he spoke on “The geometric nature of the Fundamental Lemma.” The subject is an apt one for a Current Events talk: The lemma in question was recently proved by Ngô Bảo Châu, who was just named a Fields medalist for this work.

So what is the Fundamental Lemma? Nadler began his talk by saying he wasn’t going to answer that question. He would not work through the proof. He would not even state the lemma. In an hour’s talk, it can’t be done, he said. The slide below is as close as he came. 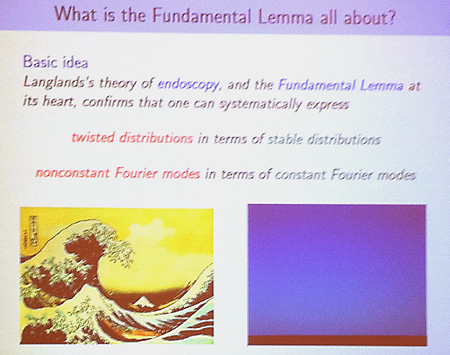 (The blurriness of this image is entirely my fault, not Nadler’s. But perhaps the fuzziness is not altogether inappropriate. I begin to think that the lemma is so abstruse it can’t even be photographed clearly.)

My aim here is not to gripe about Nadler’s talk, which was in fact a masterful presentation; I found it engaging and entertaining even when the material soared by miles over my head. (A writeup of the talk is available online (3 MB PDF), although it’s quite different from the oral presentation.)

In any event, no one else has done better with this topic. The Wikipedia page isn’t much help. When Paul Basken wrote an account for the The Chronicle of Higher Education last fall, he started out bravely but punted when it came time to state the lemma:

It is an element of an overall structure known as the Langlands Program, a “grand unifying theory” that shows common links between number theory and harmonic analysis, said Edward Frenkel, a professor of mathematics at the University of California at Berkeley.

Thomas Hales has written “A Statement of the Fundamental Lemma” for the Clay Mathematics Institute, but I’m afraid it leaves me utterly unenlightened.

Of course it doesn’t really matter much whether I grasp these ideas. I’m merely an eavesdropper, and I have no right to demand that the conversations of professional mathematicians be tailored to my needs. But in the Current Events session Nadler wasn’t addressing an audience of amateurs like me. He was speaking to a roomful of his peers and colleagues. When even an audience of mathematicians can’t understand the statement of a problem—much less the solution—then I begin to worry about the sustainability of the enterprise.

In his history of 19th century mathematics Felix Klein wrote:

When I was a student, abelian functions were … considered the uncontested summit of mathematics and each of us was ambitious to make progress in this field. And now? The younger generation hardly knows abelian functions.

How did this happen? In mathematics, as in other sciences, the same process can be observed again and again. First new questions arise, for internal or external reasons, and draw researchers away from the old questions. And the old questions, just because they have been worked on so much, need ever more comprehensive study for their mastery. This is unpleasant, and so one is glad to turn to problems that have been less developed and therefore require less foreknowledge—even if it is only a matter of axiomatics, or set theory, or some such thing.

There is some dispute about whether Klein’s obituary for abelian functions might have been premature. But the general process he describes, in which a field of study sinks under the weight of accumulated scholarship, seems like a real hazard in some areas of mathematics.

It may well be that the Fundamental Lemma is so truly fundamental that students will continue to make the necessary investment of “ever more comprehensive study.” But I do hope someone will figure out how to communicate the meaning of this work to the rest of us, or at least to the rest of the mathematical community.

3 Responses to When life gives you lemmas, make lemma-ade