Which Steve invented the iPad? 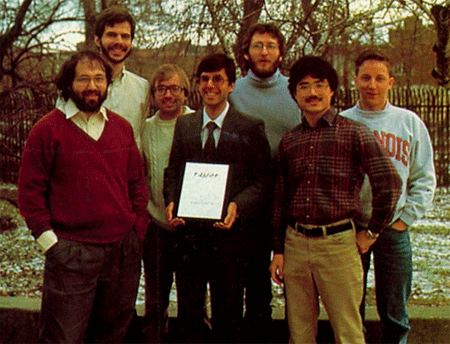 Maybe Wolfram? Or Omohundro and Skiena?

Back in 1988, a contest sponsored by a major computer company asked for visions of a future personal computer. The winning team came from the University of Illinois at Urbana-Champaign. The faculty advisers were Stephen Wolfram and Stephen Omohundro (at far left in the photo above); the student members (from left to right) were Arch Robison, Steven Skiena, Bartlett Mel, Luke Young and Kurt Thearling. Their proposal of a device called the TABLET had eerie anticipations of the contraption that goes on sale this weekend.

Some quotes from the description of the TABLET:

This rectangular slab will weigh but a few pounds, and have no buttons or knobs to play with. The front surface will be a touch-sensitive display screen and will blink to life upon touching two corners.

The front surface of our computer is a high-resolution touchscreen that yields slightly to the touch. With this single input device, we can get a tremendous range of flexibility and options. We can use it to create an entirely soft interface.

A high-resolution color display can do more than just imitate a notebook page. It will be fast enough to support video…. It takes only a little more courage to predict a Global Positioning System (GPS) receiver on our machine, either as a clip-on or a built-in component.

If we can take our computer anywhere, we need to be able to use it anywhere. This brings us to communications capabilities. Through our national telephone network, we can access any person or machine within seconds.

It seems the UIUC prophets even saw Facebook coming over the horizon:

In addition to communicating with peripherals… we can also talk to other computers. Each machine can continually broadcast personal facts that users may wish the world to know: perhaps their name, image, interests, and marital status for openers.

One interesting problem is who will appreciate all this new art? Some form of “shareware video” might arise.

Of course they didn’t get everything right. There’s the matter of the stylus and handwriting recognition (suggesting a foreknowledge of the Newton rather than the iPad). And it was all supposed to happen in the year 2000, so we’re a decade behind schedule.

Which computer company sponsored this contest? It was Apple, of course. The judges were Ray Bradbury, Alan Kay, Diane Ravitch, Alvin Toffler and Stephen Wozniak. (Steve Jobs was in exile at the time.) All of the prizes were paid in Macintosh merchandise. 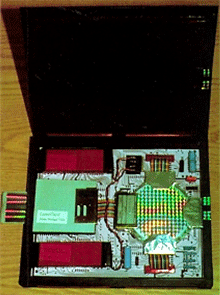 The story of the 1988 predecessor of the iPad is told in Communications of the ACM, Vol. 31, No. 6, pp. 639–646. Included there is the first teardown photograph of an iPad (right). Note the wafer-scale integration. For those who can’t get past the ACM pay-wall, a slightly different telling of the story appears on Kurt Thearling’s web site. There’s also a brief account from the UIUC computer science department.

[Just to be clear: I am aware that there's a considerable difference between imagining an innovative device and actually building it.]

2 Responses to Which Steve invented the iPad?