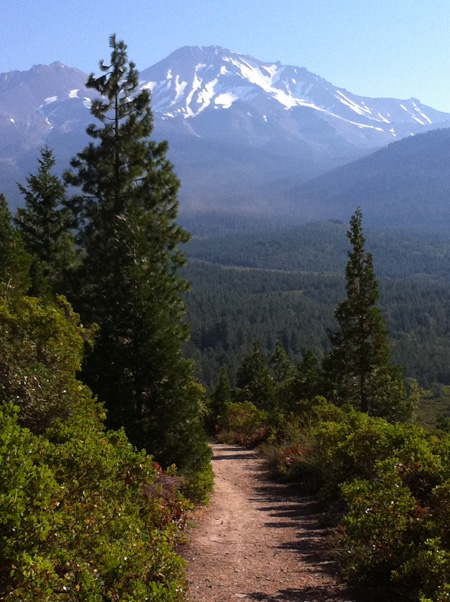 Before leaving on a trip to the West Coast, I copied my return flight information onto my Google calendar: SFO to BOS, 12:50 p.m. to 9:30 p.m. Now that I’m nearing the end of my visit to the Mythical State of Jefferson (see local landmark above), I’ve just checked the departure details by calling up the calendar on my cell phone. It tells me the flight departs at 9:50 a.m. and arrives at 6:30 p.m.

It could be worse, of course. As an eastbound traveler all that I risk is wasting three hours at the airport. If I were westbound, I might well miss my flight.

The developers of Google calendar would doubtless argue that automatic time-zone conversion is a feature, not a bug. If the event in question had been a conference call scheduled for 12:50 p.m. Eastern Daylight Time, then 9:50 a.m. Pacific Daylight Time would indeed be the moment to dial in. Or, if I had a series of pills to be taken at fixed intervals, it might be helpful to have the program remind me at the correct times as I wander across continents. But in the case of today’s flight home, the result is just plain wrong.

It’s not only a Google calendar problem. A few weeks ago a friend was entering a schedule of talks into a Drupal web page for a conference that begins November 7, 2010. All the times were mysteriously shifted by an hour. A 1:00 p.m. talk on the input form became a 2:00 p.m. talk on the displayed web page. The key to solving this mystery is knowing that November 7 is the date daylight saving time ends in (most of) the U.S.

I am certainly not the first to encounter such problems. Peter Neumann’s RISKS Digest reports hundreds of computational mishaps involving time zones or daylight saving time, going back over the past 25 years. The issue is known to Google. But what is the right fix?

Some other calendar software offers the option of specifying a time zone for an event. To handle the airline case correctly, the program needs to allow for different zones for the start and the end times. And the Drupal problem suggests we may also need some means of indicating whether or not to adjust for daylight saving time. It gets very messy. Note that an event scheduled for 1:30 a.m. on November 7, 2010, will happen twice. An event at 2:30 a.m. on March 13, 2011, will never take place.

For years my own makeshift solution to these complexities was to live in a single time zone, no matter where I was. I carried a laptop, but I never changed its time-zone setting, even when I was away from home for weeks or months. When conversion was needed, it happened in my head. Even now the Google calendar display on my laptop gives the correct departure time from SFO, because the laptop doesn’t know that it ever left Boston. But in our new world of location-aware devices, pretending to stay home is no longer an option.

I begin to wonder if the whole railroad-age concept of time zones hasn’t outlived its usefulness. But I haven’t time just now to consider the alternatives. Right now it’s time to leave for the airport. I think.

6 Responses to In the zone