A square yard of idea

After a year’s absence, I am home again in the pages of American Scientist. I want to thank the six friends and colleagues who kept the Computing Science department going while I was away. Here are their articles:

A Tisket, a Tasket, an Apollonian Gasket
Fractals made of circles do funny things to mathematicians
Dana Mackenzie
January–February 2010

Avoiding a Digital Dark Age
Data longevity depends on both the storage medium
and the ability to decipher the information
Kurt D. Bollacker
March–April 2010

The Great Principles of Computing
Computing may be the fourth great domain of science
along with the physical, life and social sciences
Peter J. Denning
September–October 2010

My new column, now available on the web and coming soon in good old ink and paper, is:

I have written before on the impressive aerial maneuvers of bird flocks, once as part of an American Scientist column in 1999 and twice here at bit-player, first in 2007 and then most recently in 2009. (Alert readers will notice that I have even retreaded a title.)

The new column focuses on the work of a European collaboration called STARFLAG, which has figured out how to track the position and velocity of individual birds in large flocks of starlings, like the gathering seen below in a photograph made near the main railroad terminal in Rome. 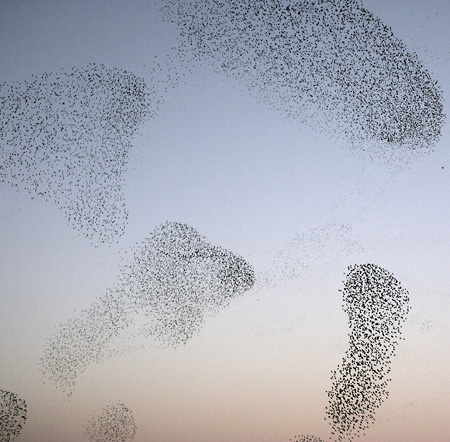 For the rest of the STARFLAG story, see the column; here I want to say a word about an earlier analyst of bird flocks, Edmund Selous (1857–1934). Selous was an English naturalist and author of at least 20 books, mostly on birds but with a few on other animals and insects. One of his last books, Thought-Transference (or What?) in Birds, published in 1931, argued that coordinated movements of birds in flocks might best be explained through some kind of telepathy. This proposal of paranormal communication between bird brains has made Selous a figure of fun. I’ve contributed my own share of mockery, and I don’t take back a word of it; the whole idea of bird telepathy is dopy. On the other hand, what a patient and determined and creative observer this man was!

Thought Transference is essentially a diary, a compendium of Selous’s field notes, many of them written down while he was crouched under hedges or hiding in a copse of firs:

April 4, 1923. (Langton Herring).—A most wretched day, the whole sky, and one may almost say the whole air, one great damp cloud, dissolving at intervals into misty rain. However, I was abroad in it and saw, at some distance, a number of small birds which, when I put up the glasses, proved, to my great joy, to be goldfinches, and I watched them for the greater part of the afternoon. They flew about from one part to another of the hillside, in an erratic, uncertain sort of manner, coming down and feeding at intervals, hovering for a little just over the ground before they descended upon it, and then moving rapidly about with little sprightly, never-changing hops. A constant feature of the flights was their all turning in the air together—so it seemed—and shooting back in the direction from which they had come, and one could never say the moment at which they might not do this….

There must have been, I think, a hundred birds as a minimum in the flock when it was at its fullest and undivided, and the sudden flashing of red heads and yellow wing-patches, when near enough to get the effect, was very striking…. A little before I left they flew to the small plantation of Scotch firs, in which I stood, and there was every tree full of goldfinches—at least it seemed so—all of them warbling and twittering in a most delightful manner. I thought they had come to roost, it being about five and the day so dull, but presently they flew off again. This was an interesting little bit for me—what would it have been with sunshine? But they were their own. Dear, pretty, sprightly little cheery birds!

But how did these goldfinches rise and turn and twist and come down again, as though it was all what they all wanted, just at the same moment, to do? Their little minds must act together. Though I cannot understand it, yet it seems to me that they must think collectively, all at the same time, or at least in streaks or patches—a square yard or so of idea, a flash out of so many brains.

I first learned of Selous and his work from Frank Heppner of the University of Rhode Island, who helped me with both the 1999 column and the recent one. When Heppner noticed that I had identified Selous as “an intrepid English bird-watcher,” he suggested that “birder” might be a more appropriate (or less offensive) description. This was doubtless good advice, but I resisted it. As far as I can tell, it was Selous himself who invented the term “bird watcher,” and it’s definitely what he called himself.

Finally, I have to confess an embarrassing error. In 2007, when I wrote here about my own Selous-like afternoon of admiring the flocks on a barren field in North Carolina, I described the event as a great congregation of starlings. Recently I looked more closely at my photographs. Although there are indeed a few European starlings (Sturnus vulgaris) in the flock, the vast majority of the birds are brown-headed cowbirds (Molothrus ater). Not even similar. So don’t call me a birder or a bird-watcher; I’m a bird-bumbler. 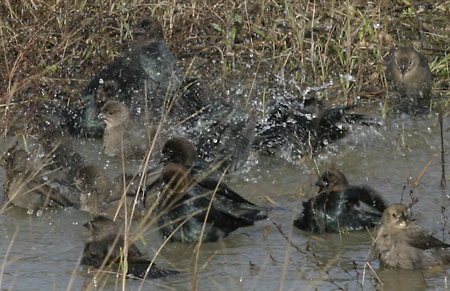 One Response to A square yard of idea