The birth of the giant component

The waste product of my document scanning project is a slag heap of extracted staples: 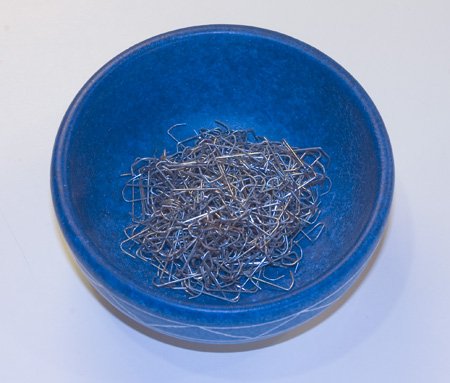 The other day I made a discovery: If you grab one of the discarded staples and lift it, the whole ball of tangled, mangled metal comes along, leaving behind only a few stragglers in the bottom of the bowl. 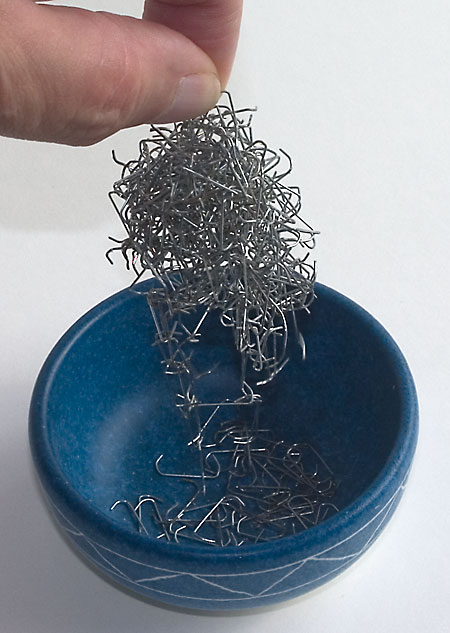 Erdős and Rényi are Paul Erdős and Alfréd Rényi, who wrote a big paper on “The Evolution of Random Graphs” 50 years ago (Publications of the Mathematical Institute of the Hungarian Academy of Sciences, 1960, 5:17–61). Their paper wasn’t quite the debut appearance of random graphs in the mathematical literature, but it’s usually cited as the theory’s point of origin.

In one version of the Erdős-Rényi process, you start with a set of n isolated vertices and then add random edges one at a time; specifically, at each stage you choose two vertices at random from among all pairs that are not already connected, then you draw an edge between them. It turns out there’s a dramatic change in the nature of the graph when the number of edges reaches n/2. Below this threshold, the graph consists of many small, isolated components; above n/2, the fragments coalesce into one giant component that includes almost all the vertices. “The Birth of the Giant Component” was later described in greater detail in an even bigger paper–it filled an entire issue of Random Structures and Algorithms (1993, 4:233–358)–by Svante Janson, Donald E. Knuth, Tomasz Luczak and Boris Pittel.

What made me think of a connection between Erdős-Rényi graphs and my hairball of staples? What I had in mind was something like this: The long, straight, middle part of a staple corresponds to an edge of a graph, and the bent end pieces, which can grab on to each other, are the vertices. Thus a single staple is a graph consisting of two vertices connected by one edge. When two staples hook up, two of their vertices merge and we’re left with a connected graph of three vertices and two edges. Since each staple contributes one edge and at most two vertices to the graph, the number of edges must be at least half the number of vertices. Thus the graph is always over the threshold for forming a giant component, according to Erdős and Rényi.

The counting part of this analysis seems okay, but I’m afraid the rest of it doesn’t hold up very well. Whatever is going on in the staple ball, the evolution of the system is not well modeled by the Erdős-Rényi process of adding edges to a fixed set of vertices. Instead, each staple brings both an edge and two vertices. The crucial event that makes the cluster hang together is the merging of vertices when staples link hands; this merging has no counterpart in the Erdős-Rényi process.

The underlying problem here is that Erdős-Rényi graphs are purely topological–there’s no concept of distance, and any two vertices are equally likely to have an edge joining them. But the staple graph has important geometric constraints. Two vertices can be joined by an edge only if the distance between them is approximately equal to the length of a staple.

The geometric structure suggests trying a different kind of model–perhaps the kind that describes the molecular structure of liquids and solids. Water molecules, for example, are linked together by a network of hydrogen bonds; each hydrogen atom in one molecule can bond to the oxygen atom in another molecule. But the bonds cannot extend over arbitrary distances; they reach only between neighboring molecules. In the resulting three-dimensional structure the basic motif is a tetrahedron with an oxygen atom at its center and hydrogen atoms at the four corners. (There’s also a schematic two-dimensional model known as square ice.) We might imagine something similar going on with the staples, where the two bent ends can form hydrogen-bond-like links to other nearby staples.

But there’s a problem with such chemical models as well. Atoms have a fixed valence (more or less–let’s not quibble); 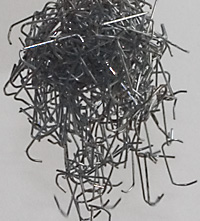 in water, for example, each hydrogen atom can form a hydrogen bond with only one oxygen atom. But we have no reason to suppose that the hooked ends of a staple can attach to only one other staple. As a matter of fact, if such a restriction were enforced, then the staples could form only chains and rings, not dense clusters. In a close look at the actual clusters, it’s easy to find places where three or more staples are all hooked together at the same point. By carefully teasing apart the cluster, I have spotted vertices that appear to have a degree of at least six.

Yet another physical process that might provide a model for the staple graph is diffusion-limited aggregation. This is the mechanism responsible for the filigree pattern in the banner at the top of the bit-player web page. It is generated by sticky particles that drift at random until they wander onto the substrate or touch another particle that is already in contact (directly or indirectly) with the substrate. For staples, I suppose the drifters would be tumbling dumbbells with sticky ends–somewhat harder to simulate.

Another factor to keep in mind is that spatial dimensions are surely important here. For one thing, there’s just more room to maneuver in three dimensions, with more opportunities to glom onto a neighbor. But in the specific case of staples, there’s another reason: Confined to a plane, they have a hard time linking up: 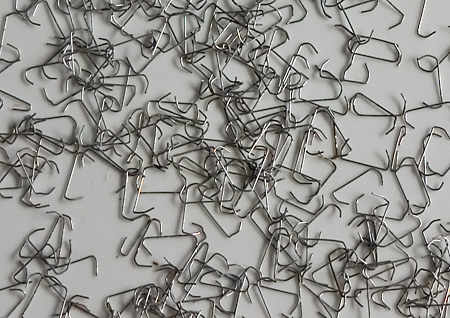 Dispersed on a flat plate, they refuse to coagulate even when swirled vigorously. The reason, presumably, is that secure links form only when the staples can turn 90 degrees and interlock.

In this connection it would seem significant that these are used staples, somewhat varied in shape, with hooked ends that had been bent approximately 180 degrees in the process of stapling and that mostly retained an angle greater than 90 degrees after being pried out the papers. I wondered how shiny new staples would behave, and so I tried the experiment. (Materials and methods: 630 Stanley Bostitch chisel-point staples, model SBS191/4CP, freshly dispensed from an open-jaw Swingline stapler.) 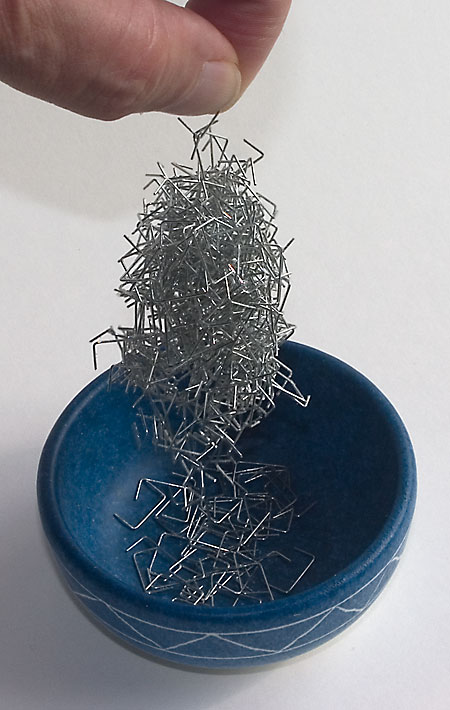 I was mildly surprised at the result. Although the aggregation was somewhat looser and more delicate, it really wasn’t that much different. Again we witness the birth of a giant component.

12 Responses to The birth of the giant component