It’s a cruel irony: As the citizens of Zimbabwe sink into bitter poverty, they are becoming millionaires and billionaires. Inflation is eroding the value of the Zimbabwean dollar so rapidly that everyday transactions turn into lessons in the arithmetic of large numbers. When the photo above was made on July 17, the largest currency denomination in circulation was a note for ZW$50,000,000,000. Last week the nation’s central bank issued a ZW$100,000,000,000 bill. (I’ll spare you the trouble of counting zeroes: That’s 1011, or 100 billion by American reckoning.)

The Zimbabwean inflation is the worst in the world at the moment, but it is not (yet) setting all-time records. Probably the most famous episode of extreme inflation was that of the German Weimar Republic (a story told vividly in Erich Maria Remarque’s novel The Black Obelisk.) In 1921, German marks traded at about 60 to the U.S. dollar; two years later, in December of 1923, the exchange rate was 4.2×1012 per dollar. The Hungarian inflation following World War II reached even greater numerical heights. In a single year the exchange rate for the Hungarian pengo went from 100 per U.S. dollar to 4×1029. As Feynman said, astronomical numbers are dwarfed by economical ones.

Takayuki Mizuno, Misako Takayasu and Hideki Takayasu have analyzed the German and Hungarian episodes of “hyperinflation.” (Citation: Physica A 308 (2002) 411; there’s also an arXiv preprint.) Inflation at its worst, they find, proceeds at a doubly exponential rate. In other words, prices rise not just as an exponential function of time—exp(t)—but as an exponentiated exponential—exp(exp(t))—or:

On a logarithmic scale, a simple exponential function yields a straight-line graph. Here is the Mizuno-Takayasu evidence that the final phase of the Hungarian inflation was superexponential:

And here are the data for the final six months plotted as log(log(p(t))), showing a simple linear trend:

How does the Zimbabwean economy look when submitted to this kind of scrutiny? I don’t know of a reliable source of data on prices in Zimbabwe, but foreign exchange rates can serve as a rough proxy. Until three months ago, the official ZW$ rate was pegged at roughly 30,000 per US$, but on May 10 the currency was allowed to float free, and the rate immediately jumped to 190,000,000 ZW$ per US$. By July 31 the rate had reached 57,381,544,140. Thus the 50 billion ZW$ note in the photo above was worth a little less than a 1 US$ by the end of last month. And that’s at the official rate of exchange; the street value is reportedly about a tenth of the official quote.

Here’s how the official exchange rate has varied in the 84 days between May 10 and August 1, as plotted on a linear scale:

And here’s the same data after a logarithmic transformation:

Although there’s more bumpiness here than in the Mizuno-Takayasu data, the trend looks reasonably linear to me. The fitted line has slope 0.03358, which yields a doubling time of about nine days. I see no hint of superexponential growth. I’d like to think this is an encouraging sign, a glimmer of hope that Zimbabwe will be spared an even more pernicious phase, when even inflation has inflation.

Runaway inflation is usually blamed on the incompetence or malevolence of governments and the central banks that implement their policies. In the case of Zimbabwe, the government of Robert Mugabe certainly has a lot to answer for. The country was once the shining success story of southern Africa—I have friends who migrated across the continent to go to school there—but the nation is now a basket case, and inflation is only one of many urgent crises. (The unemployment rate is reported to be 80 percent.) The Mugabe regime can’t escape blame for this situation. Still, it seems that hyperinflation is not to be explained purely in terms of fundamental economic imbalances—too many dollars and not enough goods. Sometimes it seems there is also a psychological component. When you believe that prices will double next week, you raise your own prices in anticipation. It’s a self-reinforcing process.

One sign of such a feedback loop in the inflationary spiral is that inflation sometimes stops even though the underlying economic situation hasn’t really changed. The Weimar hyperinflation ended with the introduction of the Rentenmark, which was set equal to 1012 old marks but really had no firmer backing than the earlier Papiermark. The change in currency did nothing to solve Germany’s problems of debt and unemployment, but the inflation ended anyway. Evidently, people chose to believe that the value of the Rentenmark would remain stable, and it did.

The central bank of Zimbabwe has just announced a similar effort at currency reform, devaluing the ZW$ by a factor of 1010. In other words, the ZW$100,000,000,000 note introduced a week ago is equal in value to a new ZW$10 bill. According to press reports, the main motive for the change was simply logistical convenience:

But perhaps one can hope that the newly denominated currency will bring more than numerical benefits. Over the weekend, the official exchange rate has held at 6.569 new Zimbabwe dollars to the U.S. dollar. We’ll have to wait a few more days to see if the curve has really flattened out.

Update 2008-09-04: With another month of exchange-rate data, here’s what the situation looks like:

The blue line in the semilog graph is the same as the one in the corresponding earlier graph—that is to say, it is fitted to the first 80 days of data. It appears that the inflation rate has diminished slightly since the revaluation at the end of July. But that slightly lower rate is still formidable; in a little more than a month the value of the new Zimbabwe dollar has fallen from about 15 cents (U.S.) to about 2 cents.

Update 2008-10-02: After another month, what passes for good news is that the rate of exponential growth does not seem to be growing:

On the other hand, news reports suggest that the situation in Harare is bleaker than ever. Money is scarce as well as nearly worthless; people stand in line all night for the privilege of withdrawing the equivalent of a dollar or two from their own bank accounts. (Note that the equivalent of $1 U.S. is $ZW137 in the devalued currency issued in August. In pre-devaluation Zimbabwe dollars, it comes to $ZW1.37 trillion.)

Isn’t it curious that both here in the U.S. and in Zimbabwe, the financial pages are filled with such enormous numbers. 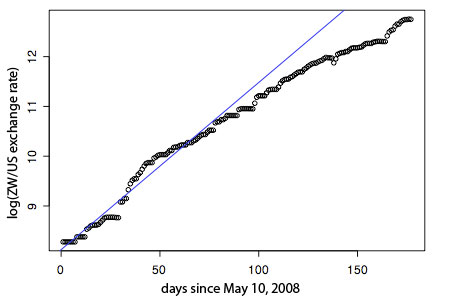 Still no sign of “hyperinflation”—if that term is taken to mean doubly exponential growth—but that can’t be much solace to the Zimbabweans whose currency has yet again lost three-fourths of its value over the course of a month. Adjusting for the August devaluation, one U.S. dollar now buys 5.6 trillion Zimbabwean dollars.

This entry was posted in games, modern life, statistics.