The Threats to the Net

My first glimpse of the World Wide Web came in 1993 on a visit to Fermilab, the physics playground near Chicago. Tom Nash, head of the computing division, showed me a screenful of text with a few highlighted phrases. When he selected one of the phrases, the screen went blank for a moment, and then another page of text appeared. We had just followed a hyperlink. I asked Tom what the system was good for, and he said it was great for sharing software documentation. I was so unimpressed I failed even to mention this new tool in the article I was writing about scientific computing at Fermilab.

A year later, after the Mosaic browser came on the scene, my eyes were opened. I wrote a gushing article on the marvels of the WWW.

There have long been protocols for transferring various kinds of information over the Internet, but the Web offers the first seamless interface to the entire network . . . The Web promotes the illusion that all resources are at your fingertips; the universe of information is inside the little box that sits on your desk.

I was still missing half the story. Yes, the web (which has since lost its capital W) opened up an amazing portal onto humanity’s accumulated storehouse of knowledge. But it did something else as well: It empowered all of us to put our own stories and ideas before the public. Economic and technological barriers were swept away; we could all become creators as well as consumers. Perhaps for the first time since Gutenberg, public communication became a reasonably symmetrical, two-way social process.

The miracle of the web is not just that the technology exists, but that it’s accessible to much of the world’s population. The entire software infrastructure is freely available, including the HTTP protocol that started it all, the languages for markup, styling, and scripting (HTML, CSS, JavaScript), server software (Apache, Nginx), content-management systems such as WordPress, and also editors, debuggers, and other development tools. Thanks to this community effort, I get to have my own little broadcasting station, my personal media empire.

But can it last?

In the U.S., the immediate threat to the web is the repeal of net-neutrality regulations. Under the new rules (or non-rules), Internet service providers will be allowed to set up toll booths and roadblocks, fast lanes and slow lanes. They will be able to expedite content from favored sources (perhaps their own affiliates) and impede or block other kinds of traffic. They could charge consumers extra fees for access to some sites, or collect back-channel payments from publishers who want preferential treatment. For a glimpse of what might be in store, a New York Times article looks at some recent developments in Europe. (The European Union has its own net-neutrality law, but apparently it’s not being consistently enforced.)

The loss of net neutrality has elicited much wringing of hands and gnashing of teeth. I’m as annoyed as the next netizen. But I also think it’s important to keep in mind that the web (along with the internet more generally) has always lived at the edge of the precipice. Losing net neutrality will further erode the foundations, but it is not the only threat, and probably not the worst one.

Need I point out that the internet lost its innocence a long time ago? In the early years, when the network was entirely funded by the federal government, most commercial activity was forbidden. That began to change circa 1990, when crosslinks with private-enterprise networks were put in place, and the general public found ways to get online through dial-up links. The broadening of access did not please everyone. Internet insiders recoiled at the onslaught of clueless newbies (like me); commercial network operators such as CompuServe and AmericaOnline feared that their customers would be lured away by a heavily subsidized competitor. Both sides were right about the outcome.

As late as 1994, hucksterism on the internet was still a social trangression if not a legal one. Advertising, in particular, was punished by vigorous and vocal vigilante action. But the cause was already lost. The insular, nerdy community of internet adepts was soon overwhelmed by the dot-com boom. Advertising, of course, is now the engine that drives most of the largest websites.

Commerce also intruded at a deeper level in the stack of internet technologies. When the internet first became inter—a network of networks—bits moved freely from one system to another through an arrangement called peering, in which no money changed hands. By the late 1990s, however, peering was reserved for true peers—for networks of roughly the same size. Smaller carriers, such as local ISPs, had to pay to connect to the network backbone. These pay-to-play arrangements were never affected by network neutrality rules. 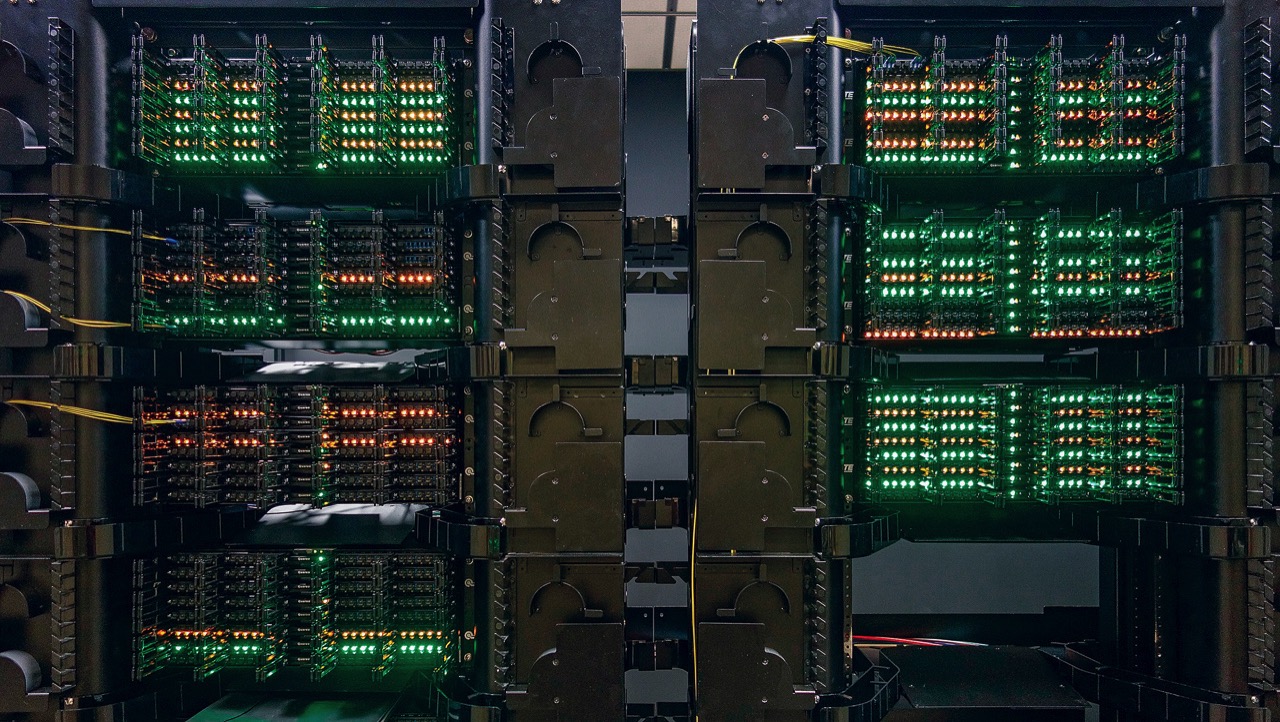 A patch panel in a “meet me room” allows independent nework carriers to exchange streams of bits. Some of the data transfers are peering arrangements, made without payment, but others are cash transactions. The meet-me room is at the Summer Street internet switching center in Boston.

Express lanes and tolls are also not a novelty on the internet. Netflix, for example, pays to place disk farms full of videos at strategic internet nodes around the world, reducing both transit time and network congestion. And Google has built its own private data highways, laying thousands of miles of fiber optic cable to bypass the major backbone carriers. If you’re not Netflix or Google, and you can’t quite afford to build your own global distribution system, you can hire a content delivery network (CDN) such as Akamai or Cloudflare to do it for you. What you get for your money: speedier delivery, caching of static content near the destination, and some protection against malicious traffic. Again the network neutrality rules do not apply to CDNs, even when they are owned and run by companies that also act as telecommunications carriers and ISPs, such as AT&T.

In pointing out that there’s already a lot of money grubbing in the temple of the internet, I don’t mean to suggest that the repeal of net neutrality doesn’t matter or won’t make a difference. It’s a stupid decision. As a consumer, I dread the prospect of buying internet service the way one buys bundles of cable TV channels. As a creator of websites, I fear losing affordable access to readers. As a citizen, I denounce the reckless endangerment of a valuable civic asset. This is nothing but muddy boots trampling a cultural treasure.

Still and all, it could be worse. Most likely it will be. Here are three developments that make me uneasy about the future of the web.

Dominance. In round numbers, the web has something like a billion sites and four billion users—an extraordinarily close match of producers to consumers. For any other modern medium—television stations and their viewers, newspaper and their readers—the ratio is surely orders of magnitude larger. Yet the ratio for the web is also misleading. Three fourths of those billion web sites have no content and no audience (they are “parked” domain names), and almost all the rest are tiny. Meanwhile, Facebook gets the attention of roughly half of the four billion web users. Google and Facebook together, along with their subsidiaries such as YouTube, account for 70 percent of all internet traffic. The wealth distribution of the web is even more skewed than that of the world economy.

It’s not just the scale of the few large sites that I find intimidating. Facebook in particular seems eager not just to dominate the web but to supplant it. They make an offer to the consumer: We’ll give you a better internet, a curated experience; we’ll show you what you want to see and filter out the crap. And they make an offer to the publisher and advertiser: This is where the people are. If you want to reach them, buy a ticket and join the party.

If everyone follows the same trail to the same few destinations, net neutrality is meaningless.

Fragmentation. The web is built on open standards and a philosophy of sharing and cooperation. If I put up a public website, anyone can visit without asking my permission; they can use whatever software they please when they read my pages; they can publish links to what I’ve written, which any other web user can then follow. This crosslinked body of literature is now being shattered by the rise of apps. Facebook and Twitter and Google and other large internet properties would really prefer that you visit them not on the open web but via their own proprietary software. And no wonder: They can hold you captive in an environment where you can’t wander away to other sites; they can prevent you from blocking advertising or otherwise fiddling with what they feed you; and they can gather more information about you than they could from a generic web browser. The trouble is, when every website requires its own app, there’s no longer a web, just a sheaf of disconnected threads.

This battle seems to be lost already on mobile platforms.

Suppression. All of the challenges to the future of the web that I have mentioned so far are driven by the mere pursuit of money. Far scarier are forms of manipulation and discrimination based on noneconomic motives.

Governments have ultimate control over virtually all communications media—radio and TV, newspapers, books, movies, the telephone system, the postal service, and certainly the internet. Nations that we like to think of as enlightened have not hesitated to use that power to shape public discourse or to suppress unpopular or inconvenient opinions, particularly in times of stress. With internet technology, surveillance and censorship are far easier and more efficient than they ever were with earlier media. A number of countries (most notoriously China) have taken full advantage of those capabilities. Others could follow their example. Controls might be introduced overtly through legislation or imposed surreptitiously through hacking or by coercing service providers.

Still another avenue of suppression is inciting popular sentiment—burning down websites with tiki torches. I can’t say I’m sorry to see the Nazi site Daily Stormer hounded from the web by public outcry; no one, it seems, will register their domain name or host their content. Historically, however, this kind of intimidation has weighed most heavily on the other end of the political spectrum. It is the labor movement, racial and ethnic and religious minorities, socialists and communists and anarchists, feminists, and the LGBT community who have most often had their speech suppressed. Considering who wields power in Washington just now, a crackdown on “fake news” on the internet is hardly an outlandish possibility.

In spite of all these forebodings, I remain strangely optimistic about the web’s prospects for survival. The internet is a resilient structure, not just in its technological underpinnings but also in its social organization. Over the past 20 years, for many of us, the net has wormed its way into every aspect of daily life. It’s too big to fail now. Even if some basement command center in the White House had a big red switch that shuts down the whole network, no one would dare to throw it.

4 Responses to The Threats to the Net