In times like these one craves distraction, or maybe anaesthesia. On the whole, mathematics is better for you than ethanol, and you can even do it while driving. So in spare moments I’ve been noodling away at the following problem, tweeted a week ago by James Tanton:

The answer to Tanton’s question is surely No: The series will never again land on an integer. I leaped to that conclusion immediately after reading the definition of the series and glancing at the first few terms. But what makes me so sure? Can I prove it?

I wrote a quick program to generate more terms:

Overall, the trend visible in these results seemed to confirm my initial intuition. When the fractions are expressed in lowest terms, the denominator generally grows larger with each successive term. Looking at the terms more closely, it turns out that the denominators tend to be products of many small primes, whereas the numerators are either primes or products of a few comparatively large primes. For example:

To produce an integer, we need to cancel all the primes in the factorization of the denominator by matching primes in the numerator; given the pattern of these numbers, that looks like an unlikely coincidence.

But there is reason for caution. Note the seventh term in the sequence, where the denominator has decreased from \(60\) to \(20\). To understand how that happens, we can run through the calculation of the term, which starts by summing the six previous terms.

Then we calculate the mean, and add 1 to get the seventh term:

Cancelations reduce the numerator and denominator of the mean by a factor of 18. It seems possible that somewhere farther out in the sequence there might be a term where all the factors in the denominator cancel, leaving an integer.

Another point to keep in mind: For large \(n\), the value of the Tanton function grows very slowly. Thus if integer values are not absent but merely rare, we might have to compute a huge number of terms to get to the next one. Reaching the neighborhood of 100 would take more than \(10^{40}\) terms. 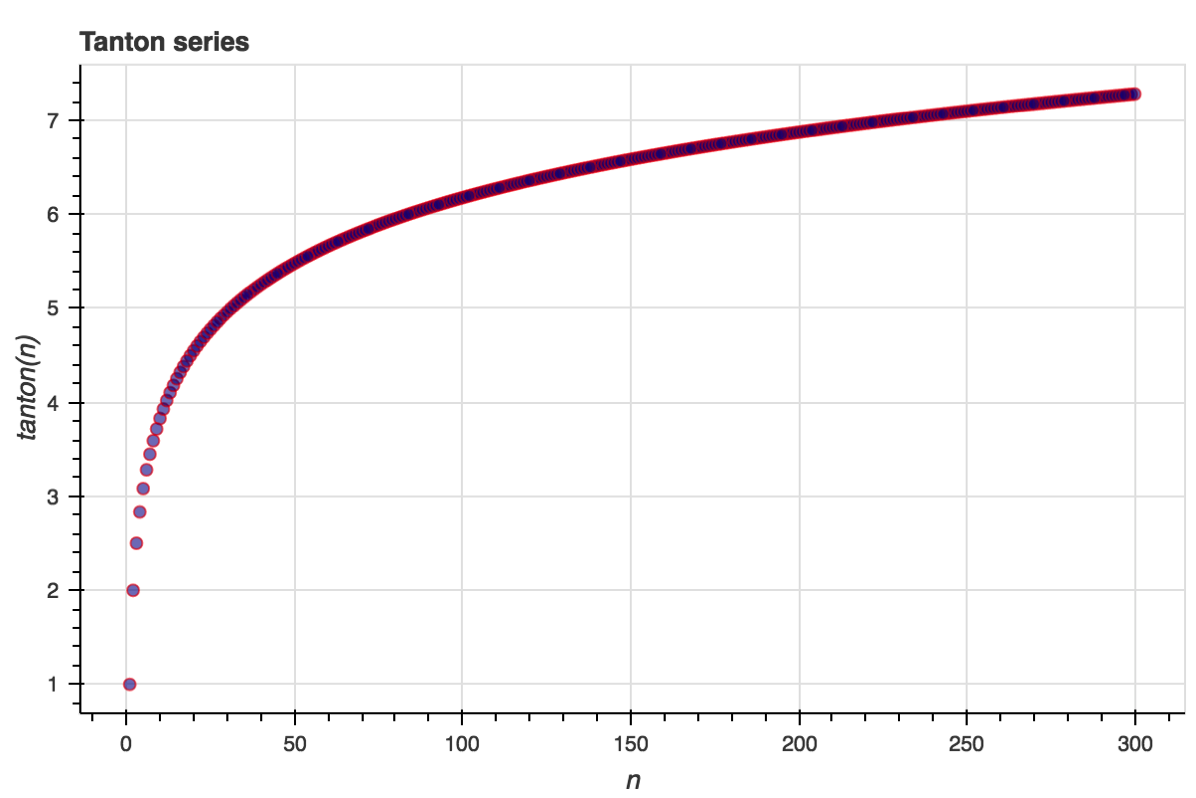 So what do you think? Can we prove that no further integers appear in Tanton’s sequence? Or, on the contrary, might my instant conviction that no such integers exist turn out to be an alternative fact?

I’ve had my fun with this problem. I know the answer now, but I’m not going to reveal it yet. Others also deserve a chance to be distracted, or anaesthetized. I’ll be back in a few days to follow up—unless commenters explain what’s going on so thoroughly there’s nothing left for me to say.

Update 2017-01-30: Okay, pencils down. Not that anyone needs more time. As usual, my readers are way ahead of me. (See comments below, if you haven’t read them already.)

My own slow and roundabout voyage of discovery went like this. I had written a little piece of code for printing out n terms of the series, directly implementing the definition given in James Tanton’s tweet:

But this is criminally inefficient. On every pass through the loop we calculate the mean of the entire sequence, then throw that work away and do it all again the next time. Once you have the mean of \(n-1\) terms, isn’t there some way of updating it to incorporate the nth term? Well, yes, of course there is. You just have to appropriately weight the new term, dividing by n, before adding it to the mean. Here’s the improved code:

The first 10 partial sums are:

One fact about the harmonic series is very widely known: It diverges. Although \(H_{n}\) grows very slowly, that growth continues without bound as \(n\) goes to infinity. Another fact, not quite as well known but of prime importance here, is that no term of the series after the first is an integer. The simplest proof shows that when you factor the numerator and the denominator, the denominator always has more \(2\)s than the numerator; thus when the fraction is expressed in lowest terms, the numerator is odd and the denominator even. This proof can be found in various places on the internet, such as StackExchange. There’s also a good explanation in Julian Havil’s book Gamma: Exploring Euler’s Constant.

Neither of those sources mentions anything about the origin or author of the proof. When I scouted around for more information, I found more than a dozen sources that attribute the proof to “Taeisinger 1915,” but with no reference to an original publication. For example, a recent paper by Carlo Sanna (Journal of Number Theory, Vol. 166, September 2016, pp. 41–46) mentions Taeisinger and cites Eric Weisstein’s Concise Encyclopedia of Mathematics; consulting the online version of that work, Taeisinger is indeed credited with the theorem, but the only reference is to another secondary source, Paul Hoffman’s biography of Erdős, The Man Who Loved Only Numbers; there, on page 157, Hoffman writes, “In 1915, a man named Taeisinger proved. . .” and gives no reference or further identification. So who was this mysterious and oddly named Taeisinger? I have never heard of him, and neither has MathSciNet or the Zentralblatt or the MacTutor math biography pages. In Number Theory: A Historical Approach John J. Watkins gives a slender further clue: The first initial “L.”

After some further rummaging through bookshelves and online material, I finally stumbled on a reference to a 1915 publication I could actually track down. In the Comptes Rendus Mathematique (Vol. 349, February 2011, pp. 115–117) Rachid Aït Amranea and Hacène Belbachir include this item in their list of references:

When I got ahold of that paper, here’s what I found:

I still don’t know much of anything about Theisinger. His first name was Leopold; he came from Stockerau, a small town in Austria that doesn’t seem to have a university; he wrote on geometry as well as number theory.

What I do know is that a lot of authors have been copying each other’s references, going back more than 20 years, without ever bothering to look at the original publication.

8 Responses to A Tantonalizing Problem