A habit of finding pleasure in thought rather than in action is a safeguard against unwisdom and excessive love of power, a means of preserving serenity in misfortune and peace of mind among worries. A life confined to what is personal is likely, sooner or later, to become unbearably painful; it is only by windows into a larger and less fretful cosmos that the more tragic parts of life become endurable.

For Russell, mathematics was one of those windows opening on a calmer universe. So it is for me too, and for many others. When you are absorbed in solving a problem, understanding a theorem, or writing a computer program, the world’s noisy bickering is magically muted. For a little while, at least, you can hold back life’s conflicts, heartaches, and disappointments.

But Russell was no self-absorbed savant, standing aloof from the issues of his time. On the contrary, he was deeply engaged in public discourse. During World War I he took a pacifist position (and went to prison for it), and he continued to speak his peace into the Vietnam era.

Bit-player.org is meant to be a little corner of Russell’s less fretful cosmos, both for me and, I hope, for my readers. In this space I would prefer to shut out the clamor of the hustings and the marketplace. And yet there comes a time to look up from bit-playing and listen to what’s going on outside the window.

A candidate for the U.S. presidency is goading his followers to murder his opponent. Here are his words (in the New York Times transcription):

A day later, Donald Trump said he was merely suggesting that gun owners might be roused to come out and vote, not that they might assassinate a president. Yeah, sure. And when Henry II of England mused, “Who will rid me of this troublesome priest?” he was just asking an idle question. But soon enough Thomas Becket was hacked to death on the floor of Canterbury Cathedral.

This is not the first time Trump has strayed beyond tasteless buffoonery into reckless incitement. But this instance is so egregious I just cannot keep quiet. His words are vile and dangerous. I have to speak out against them. We face a threat to the survival of democracy and civil society.

Mathematics, after all, is one of those luxuries we can afford only so long as the thugs do not come crashing through the door. Another great mathematician offers a lesson here, in a tale told by Plutarch. During the sack of Syracuse, according to one version of the legend, Archimedes was puzzling out a mathemetical problem. He was staring at a diagram sketched in the sand when Roman soldiers came upon him. Deep in thought, he refused to turn away from his work until he had finished the proof of his theorem. One of the soldiers drew a sword and ran him through. 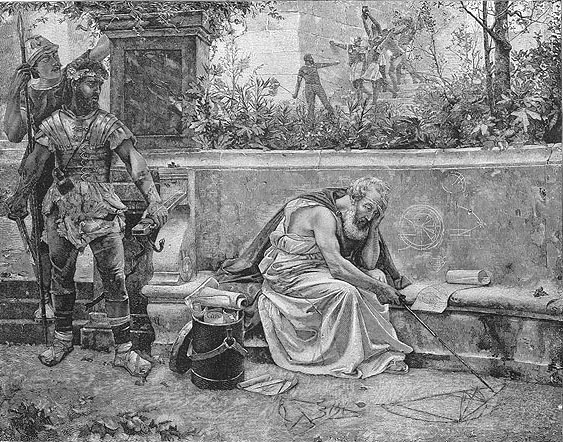