Whales of the Web

The average web site has links connecting it with 29 other sites. I came up with this number in the following way. A data set I’ve been playing with for a few weeks lists 43 million web sites and 623 million links between sites; the quotient of those numbers is about 14.5. Since each link has two ends, the per-site total of inbound plus outbound links is double the quotient.

Twenty-nine links is the average, but by no means is it a typical number of links. Almost half of the sites have four or fewer links. At the other end of the spectrum, the most-connected web site (blogspot.com) has almost five million links, and there are six more sites with at least a million each. The distribution of link numbers—the degree sequence—looks like this (both scales are logarithmic, base 2): 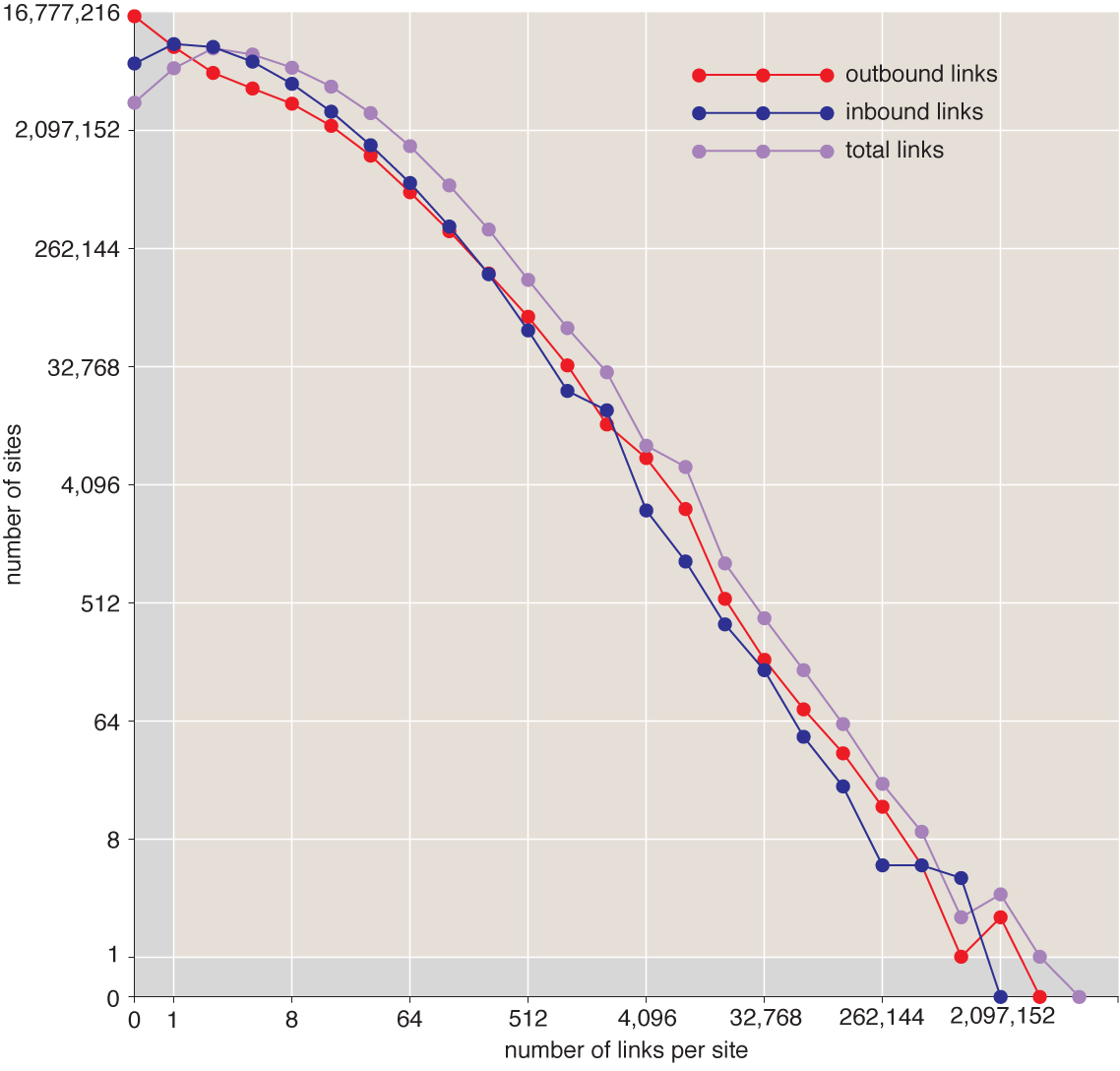 I want to emphasize that these are figures for web sites, not web pages. The unit of aggregation is the “pay-level domain”—the domain name you have to pay to register. Examples are google.com or bbc.co.uk. Subdomains, such as maps.google.com, are all consolidated under the main google.com entry. Any number of links from pages on site A to pages on site B are recorded as a single link from A to B.

The source of these numbers is the Web Data Commons, a project overseen by a group at the University of Mannheim. They extracted the lists of domains and the links between them from a 2012 data set compiled and published by the Common Crawl Foundation (which happens to be the subject of my latest American Scientist column). The Common Crawl does essentially the same thing as the big search engines—download the whole Web, or some substantial fraction of it—but the Common Crawl makes the raw data publicly available.

There are interesting questions about both ends of the degree sequence plotted above. At the far left, why are there so many millions of lonely, disconnected web sites, with just one or two links, or none at all? I don’t yet feel I know enough to tell the story of those orphans of the World Wide Web. I’ve been focused instead on the far right of the graph, on the whales of the Web, the handful of sites with links to or from many thousands of other sites.

From the set of 43 million sites, I extracted all those with at least 100,000 inbound or outbound links; in other words, the criterion for inclusion in my sample was \(\min(indegree, outdegree) \ge 100,000\). It turns out that just 112 sites qualify. In the diagram below, they are grouped according to their top-level domain (com, org, de, and so on). The size of the colored dot associated with each site encodes the total number of links; the color indicates the percent of those links that are incoming. Hover over a site name to see the inbound, outbound and bidirectional links between that site and the other members of this elite 112. (The diagram was built with Mike Bostock’s d3.js framework, drawing heavily on this example.)

The bright red dots signify a preponderance of outgoing links, with relatively few incoming ones. Many of these sites are directories or catalogs, with lists of links classified by subject matter. Such “portal sites” were popular in the early years of the Web, starting with the World Wide Web Home at CERN, circa 1994; another early example was Jerry and David’s Guide to the World Wide Web, which evolved into Yahoo. Search engines have swept aside many of those hand-curated catalogs, but there are still almost two dozen of them in this data set. Curiously, the Netherlands and Germany (nl and de) seem to be especially partial to hierarchical directories.

Bright blue dots are rarer than red ones; it’s easier to build a site with 100,000 outbound links than it is to persuade 100,000 other sites to link to yours. The biggest blue dot is for wordpress.org, and I know the secret of that site’s popularity. If you have a self-hosted WordPress blog (like this one), the software comes with a built-in link back to home base.

Another conspicuous blue dot is gmpg.org, which mystified me when I first noticed that it ranks fourth among all sites in number of incoming links. Having poked around at the site, I can now explain. GMPG is the Global Multimedia Protocols Group, a name borrowed from the Neal Stephenson novel Snow Crash. In 2003, three friends created a real-world version of GMPG as a vehicle for the XHTML Friends Network, which was conceived as a nonproprietary social network. One of the founders was Matt Mullenweg, who was also the principal developer of WordPress. Hence every copy of WordPress includes a link to gmpg.org. (The link is in the <head> section of the HTML file, so you won’t see it on the screen.) At this point GMPG looks to be a moribund organization, but nonetheless more than a million web sites have links to it.

Networkadvertising.org is the web site of a trade group for online advertisers. Presumably, its 143,863 inbound links are embedded in ads, probably in connection with the association’s opt-out program for behavioral tracking. (To opt out, you have to accept a third-party cookie, which most people concerned about privacy would refuse to do.)

Still another blue-dot site, miibeian.gov.cn, gets its inward links in another way. If I understand correctly, all web sites hosted in China are required to register at miibeian.gov.cn, and they must place a link back to that site on the front page. (If this account is correct, the number of inbound links to miibeian.gov.cn tells us the number of authorized web sites in China. The number in the 2012 data is 289,605, which seems low.)

One final observation I find mildly surprising: Measured by connectivity, these 112 sites are the largest on the entire Web, and you might think they would be reasonably stable over time. But in the three years since the data were collected, 10 percent of the sites have disappeared altogether: Attempts to reach them either time out or return a connection error. At least a few more sites have radically changed their character. For example, serebella.com was a directory site that had almost 700,000 outbound links in 2012; it is now a domain name for sale. Among web sites, it seems, nobody is too big to fail.

The table below lays out the numbers for the 112 sites. It’s sortable: Click on any of the column headers to sort on that field; click again to reverse the ordering. If you’d like to play with the data yourself, download the JSON file.

7 Responses to Whales of the Web