Notes from the JMM

The annual Joint Mathematics Meetings are one of those vast smörgåsbord meals where you can’t possibly eat everything. I managed to sample 1 percent of the menu this year. By my count, the four days of meetings included 2,743 scheduled events (mostly talks, but also panel discussions, cocktail parties, poetry readings, film showings, and other diversions); I attended 28 of them. There are \[\binom{2743}{28} \approx 5 \times 10^{66}\] ways to choose such a sampling, so it’s unlikely any of the other 6,424 participants experienced exactly the same meeting I did.

As a journalist and a generalist, I try to maintain a balanced mathematical diet, but this year I pigged out on number theory. A third of the talks I heard were in that area. There’s been a a lot of buzz lately about progress toward a proof of the twin-primes conjecture, starting with a surprise announcement last spring by Yitang Zhang of the University of New Hampshire. Twin primes, such as \(5\) and \(7\) or \(101111\) and \(101113\), are primes as closely spaced as two odd primes can be. The twin-primes conjecture says there are infinitely many of these pairs. Zhang didn’t prove there are infinitely many primes \(p\) and \(q\) with \(q-p=2\), but he came really close. He proved there are infinitely many primes \(p\) and \(q\) with \(q-p \le 70\,000\,000\). A few months later James Maynard, a postdoc at the Université de Montreal, brought the constant down from \(70\,000\,000\) to \(600\). (Maynard was inspired by Zhang’s work but used different methods. Terry Tao got the same result at the same time.) Then a Polymath collaboration organized by Tao made further progress. At last report, the minimum gap for which we can say with certainty there are infinitely many primes is 270.

For more about the mathematics behind this work, I recommend two excellent articles by Erica Klarreich, published in the Simons Foundation’s Quanta magazine:

I’d like to add a few thoughts about the human side of Zhang’s story, as best I can piece that story together from published sources.

According to a profile by Virginia Stuart in UNH Magazine, Zhang was born in China in 1955 and was a boy when the Great Proletarian Cultural Revolution and the Red Guards movement convulsed the nation. With the rest of his family he was sent to the countryside for “re-education” through labor. The result of re-education was not much education, but he made up for lost time and in 1978 (at age 23) entered Peking University, earning bachelor’s and master’s degrees in mathematics.

In 1984 S. S. Chern took several American mathematicians to Beijing, where they spent a summer working with Chinese graduate students. Zhang was one of the students, and the following year he came to the U.S. to study at Purdue with T. T. Moh, who had been a member of the Chern delegation. Moh has recently written a short memoir on Zhang’s period at Purdue, from which I quote at length:

When he arrived, we had a cordial talk. Yitang expressed his desire to work in the field of Algebraic Geometry…. Yitang also mentioned that he wanted to study under my guidance…. I was surprised by Yitang’s next request of working on the Jacobian conjecture as his thesis topic. I felt it was odd to select such a difficult task.

The Jacobian conjecture is one of Steve Smale’s “problems for the 21st century,” which Smale describes as follows:

Suppose \(f : \mathbb{C}^n \to \mathbb{C}^n\) is a polynomial map with the property that the derivative at each point is non-singular. Then must \(f\) be one-to-one?

I can say nothing more about this question except that it remains open, and that Moh is the author of a long 1983 paper with computational results for all two-variable polynomials of degree less than 100. Moh continues:

Yitang spent all of his free time thinking of mathematics. After years, Yitang started to believe that he might have gotten a solution, one independent of my paper, to the Jacobian conjecture. As a gatekeeper of the palace of the Jacobian conjecture, I did my duty of examining every claim presented to me and denied the entrance of anybody (even if the claim has nothing to do with my work) if the proof was invalid. “Maybe the Jacobian conjecture is a problem for the future”, I thought.

By 1991 Zhang was approaching the seven-year limit for Ph.D. candidates at Purdue. He wrote a brief thesis on a specialization of the Jacobian conjecture, which earned him his degree. Then he took off. Moh writes:

Sometimes I regreted not fixing him a job. But really, who could tell whether it was a good decision or not? Maybe it was his destiny to endure and turn out to be great…. When I looked into his eyes, I found a disturbing soul, a burning bush, an explorer who wanted to reach the north pole, a mountaineer who determined to scale Mt. Everest, and a traveler who would brave thunders and lightnings to reach his destination. Yitang never came back to me requesting recommendation letters. Apparently, he did not seek a job.

An interview with Zhang, conducted by Michael Segal and published in Nautilus, puts a somewhat different spin on the matter of recommendations. In the interview Zhang remarks: “During that period it was difficult to find a job in academics. That was a job market problem. Also, my advisor did not write me letters of recommendation.”

Zhang spent most of the next decade without an academic position. Here’s the Wikipedia account of that period: “Prior to getting back to academia, he worked for several years as an accountant and a delivery worker for a New York City restaurant. He also worked in a motel in Kentucky and in a Subway sandwich shop.” The article by Virginia Stuart makes clear that the job as an accountant and the job at Subway were the same job. “In a pinch, he would help out behind the counter, a fact that has been exaggerated in the press and has inspired online banter about a mathematical genius making sandwiches for a living.”

In 1999 Zhang was hired as a lecturer in the department of mathematics and statistics at UNH. I haven’t been able to learn exactly how this came about. The chairman of the department of the time was Kenneth Appel, who had his own history of breakthrough proofs—in his case, the four-color theorem. Appel died just a few days after learning of Zhang’s triumph.

UNH saved Zhang from a life of making footlong sandwiches, but for 15 years his job was a nontenured lectureship, on a year-to-year contract. He apparently taught a lot of first-year calculus—and got rave reviews on ratemyprofessors.com. One review says, in its entirety: “HOT!!!” The UNH web site still lists him as a lecturer, but news reports this month say he has been promoted to full professor.

At the JMM, Andrew Granville of Montreal gave a big tutorial talk summing up the recent and ongoing work on bounded gaps between primes. But the main event 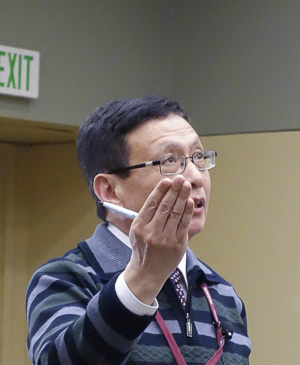 happened a day earlier, when both Maynard and Zhang spoke in the same session. The room was jammed. Maynard went first, and gave a lucid and precise account of his own work. When he finished, Zhang stepped forward with a sheaf of transparencies, which he’d been scribbling on with a Sharpie pen during some of the earlier talks in the session. There was a brief delay while the video projector was set aside and the overhead projector was moved into place and switched on. Still more people flowed into the room from the doors at the rear. (I had arrived early to get a seat up front.) The hubbub continued until Granville rose and bellowed out “Quiet!” Then Zhang turned to face the audience and announced: “I know you all expect me to talk about twin primes, as the abstract says, but I’ve decided to talk about something else.” I was mildly shocked. I don’t think I’ve ever seen anyone pull such a switcheroo at a major conference. 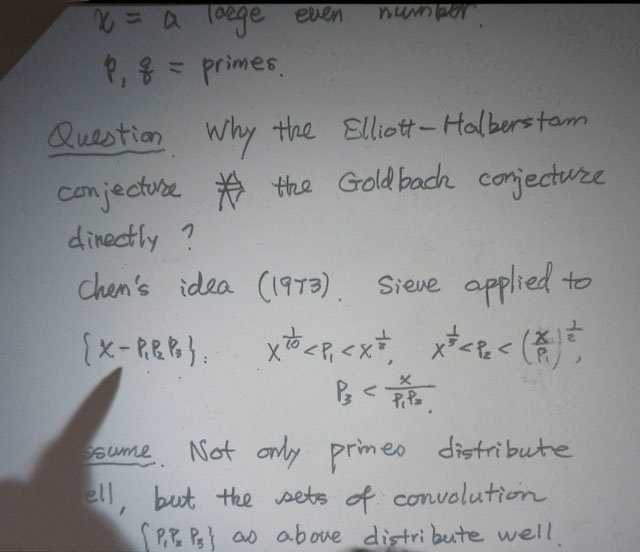 “Something else” turned out to be the Goldbach conjecture—the assertion that every even integer greater than 2 can be expressed as the sum of two prime numbers. Zhang wasn’t claiming to have proved the Goldbach conjecture; he wasn’t even laying out a clear pathway to a proof; but he did vaguely hint that he has some idea of how to proceed. We’ll see, I guess. For the moment he has a healthy balance of credibility.

An hour after he gave his talk, Zhang was awarded a share of the Frank Nelson Cole Prize in Number Theory.

Nonmathmatical geographic/autobiographic/photographic addendum. The JMM was held in Baltimore this year, a city I lived in from age 0 to age 4 and again from age 20 through 23. On this trip I spent my first few hours in town strolling around taking pictures, and belatedly discovered that my camera was set to one of the cute “illustration” modes that modern digital technology has to offer. I was shocked at this switcheroo, too, but after a few days the cartoonish pictures grew on me. 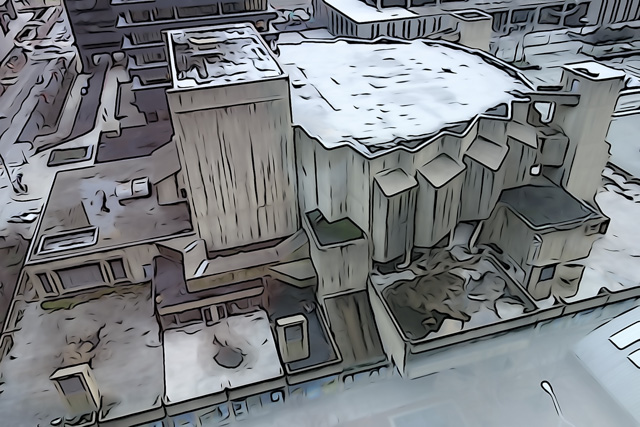 The image above shows the Morris A. Mechanic Theater, which was the centerpiece of an urban redevelopment project in the early 1970s, when I was a young man about town. The theater was supposed to bring Broadway tryouts and other forms of stagecraft back to the heart of the city. It closed in 2004, and now even the posters promising another phase of redevelopment are looking tattered.

As for the Hotel Junker/Envy Hotel, below, I didn’t stay there, but it was just around the corner. Echt Baltimore. 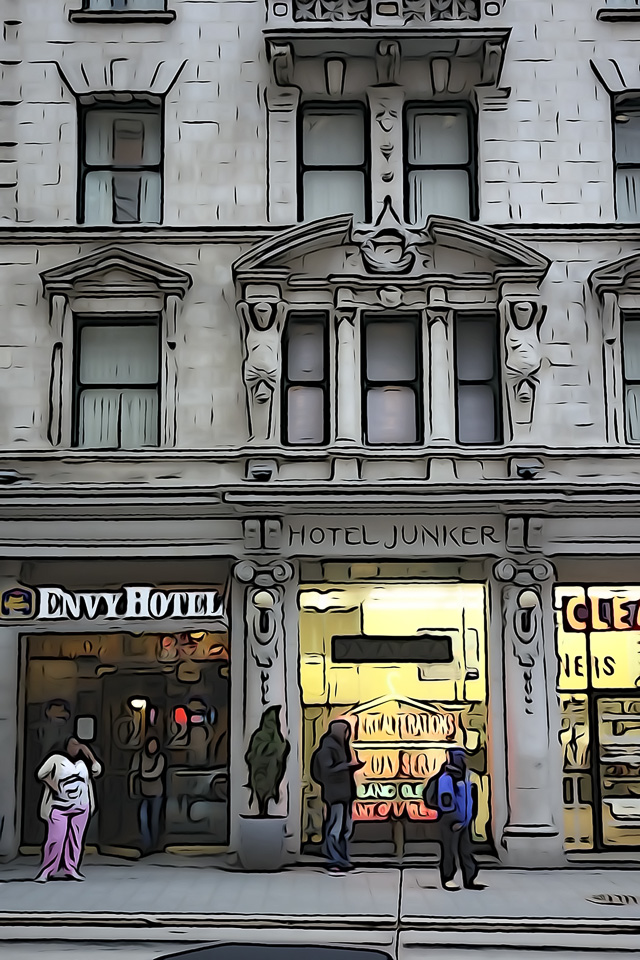 5 Responses to Notes from the JMM