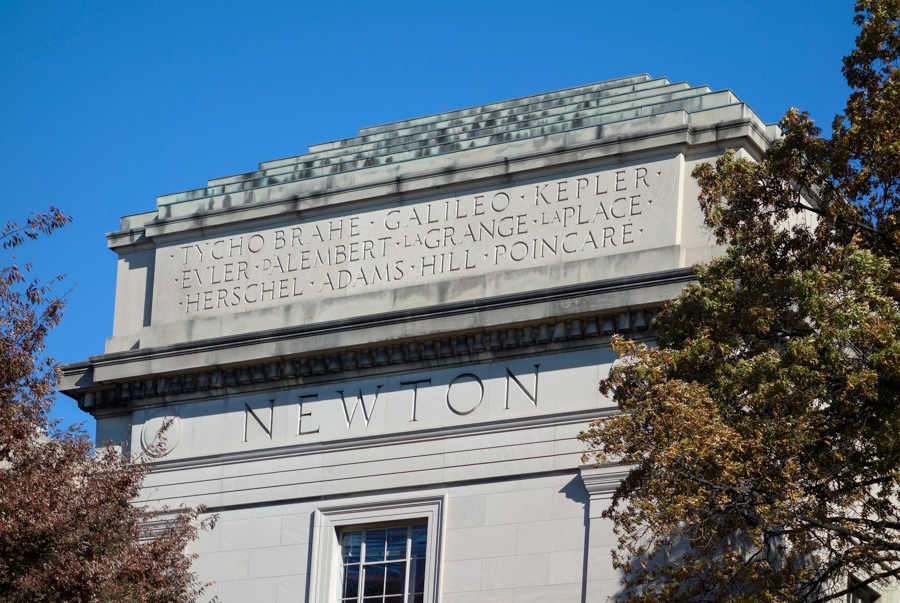 Strolling across Killian Court, the only sizeable patch of public grass on the MIT campus, I glanced up at the entabulature pictured above. Chiseled into the marble façade are the names of eleven celestial mechanics: astronomers and mathematicians who figured out how the solar system works. I could attach identities to nine of those names—or thirteen of them if you count all the astronomical Herschels (William, Caroline, John, Alexander). Two names stumped me. Do you know who Adams was? How about Hill?

In this age of Google and Wikipedia, it doesn’t take long to fill in the blanks. But tracking down Hill did require two searches because my first source—a 1922 article in The Tech, the MIT student newspaper—omitted that name. Maybe the Tech author was stumped, too.

Apart from Newton, who stands alone, the names are in birth order (assuming that Herschel is either Caroline or John). It’s not really surprising that the two names I didn’t know are among the later ones. When the buildings around Killian Court were erected in 1916, Galileo and Kepler had been heroes of science for more than 300 years; they had already passed the test of time. But Adams, Hill, and Poincaré were figures of the very recent past. Carving their names in stone amounted to making a bet on the judgment of posterity.

In the case of Henri Poincaré, the bet paid off. His reputation is soaring even higher now than it was at his death in 1912. (There’s a hefty recent biography by Jeremy Gray that I mean to read one of these days.)

Adams is a name that I suppose I should have recognized, because I’ve read his story several times, going back to childhood. But the bell didn’t ring. John Couch Adams (1819–1892) was one of two astronomers who predicted the existence of a planet beyond Uranus; the other was Urbain Le Verrier, who published first and whose work led directly to the discovery of Neptune. In choosing Adams and excluding Le Verrier, MIT was taking sides in a priority dispute. Some recent historical scholarship suggests they took the wrong side.

As for George William Hill (1838–1914), the MacTutor biography suggests he was an interesting character, and I am glad to have finally made his acquaintaince. Apparently he spent his entire career—a lifetime, really—wrestling in solitude with the three-body problem. He didn’t win the match.

I don’t know enough about the history of celestial mechanics to say with any authority that Adams and Hill don’t merit a place on this list. On the other hand, I can state with firm conviction that there’s a scandalous omission from the MIT pantheon. We have Euler (or EVLER, in monumental capitals), but where oh where is Gauss? By modern measures he ranks among the very greatest mathematicians, and he first achieved fame for work in celestial mechanics—predicting the position of the planetoid Ceres. Yet he is not listed here, nor does his name appear on any of the nine other honor-roll tablets surrounding Killian Court.

(Another conspicuous absence in the photo above has an easy explanation. Along with Tycho, Galileo and Kepler, surely one should mention Copernicus, no? In fact he has a place in the court of honor. Like Newton, Copernicus is on the A-list. He gets sole possession of an architrave, with his name writ in double-size letters.)

The MIT archives have published a few of the letters from MIT faculty suggesting names for these tablets. I detect no evidence that any of the nominators were bearing in mind that their selections would still be on exhibit a century hence. No one suggested leaving a few blank spaces where future generations might express their own preferences. I guess that would go against the whole spirit of stone inscription, where the idea is to make a commitment, stake out a position, proclaim eternal truths. You just have to be bold—and foolish.

If the same exercise were carried out today, the roster of names would be different. For one thing, we’d want to make room for people who were still living—or not yet born—in 1916: Einstein, Hubble, Turing, Gödel, Bohr, Dirac, Crick…. And it’s not just the names that would change; the categories have shifted, too. Celestial mechanics does not figure quite so prominently in modern thought as it once did, and the close ties between mathematics and astronomy have frayed somewhat. New fields are being cultivated, such as computation and information theory, as well as nuclear and quantum physics.

My question is: Would the faculty today acknowledge that the measure of greatness is certain to change again over the next 100 years, in ways we can’t predict? Maybe they would be shrewd enough to choose some medium more fluid than stone—perhaps a plasma display with a Twitter feed showing how various scientists are trending, moment by moment.

In the meantime, nature has overgrown and obscured some of those early 20th century judgments. Trees planted 75 years ago around the perimeter of Killian Court are now taller than the buildings, with the result that some of the panels can be seen only through the bare boughs of winter. In the photo below another list of names is glimpsed through an opening in the leafy canopy. The thread binding together the members of this group seems to be mechanical engineering and invention. Could you pass a quiz on those dozen names? 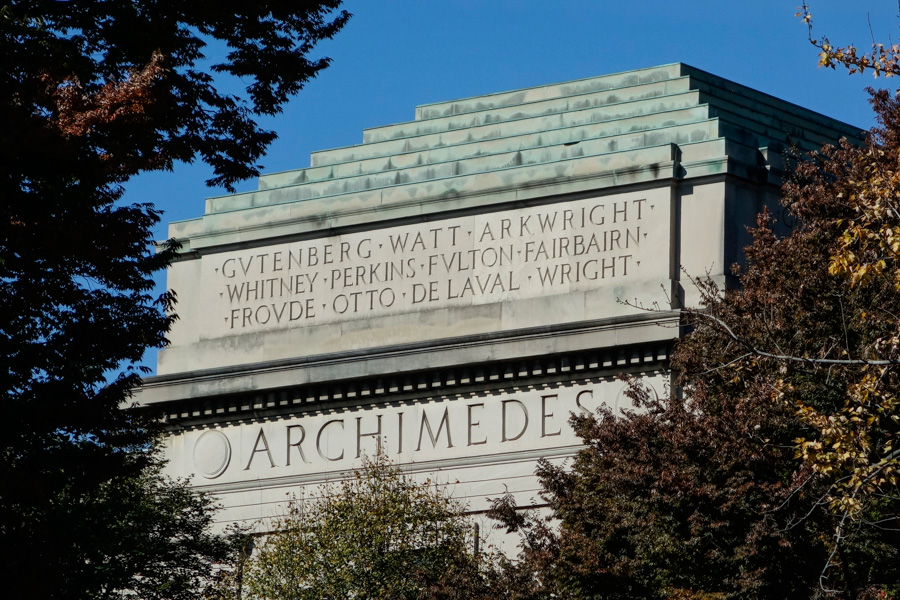 This entry was posted in mathematics, modern life, science.

One Response to Boldface names