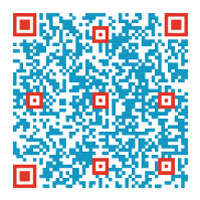 Yes, that’s one of those annoying QR codes that seem to be turning up all over the place lately. The jumble of red and blue pixels appears on the front of the holiday greeting cards that my wife Rosalind and I sent to a few friends and family-members last week. Since the card has an online component, I thought I might share it here with a wider circle of acquaintances. So let me take this opportunity to wish everyone a happy 2012—all 366 days of it.

If you have a QR reader on your cell phone, you should be able to scan the code directly from the screen. You’ll be taken to a web page where the same pattern appears, and tapping the red targets should eventually get you to a greeting-of-the-season. Unfortunately, the Javascript driving this transformation doesn’t seem to run very well on some phones. (I’ve tested it on iPhones, iPads and a Palm Pre, where it is balky but functional; I’ve had at a report that it fails entirely on at least one Android phone.) If anyone can offer hints or clues about what I might be doing wrong, I’ll be grateful.

In any case, the small-screen version of the program isn’t nearly as nice as the one for grown-up computers, which you can reach by clicking here or on the image above. And there’s more about my travails with cell-phone Javascript (and SVG) in the nerd notes.