Posted on 1 September 2012 by Brian Hayes

For something like 80 years, a traffic light was an ordinary incandescent light bulb mounted behind a colored glass lens. Then, in 1999, LED signal lights began appearing at street corners; the light bulb was replaced by an array of small light-emitting diodes shining through a diffusing lens. LEDs are more efficient than incandescent bulbs, and they last longer. Moreover, having many LEDs instead of one tungsten filament offers the safety advantage of a gradual failure mode. As I wrote in my Field Guide to the Industrial Landscape: “If one small emitter burns out, the rest continue to shine.”

That sentence was written when LED traffic lights were still very new, and I had never actually seen one with a failed emitter. Now that the LED signals have several years of service behind them, I’ve begun to notice a lot of defects, and they don’t look like what I expected. Instead of random, isolated blemishes on the face of the signal, I’m seeing large scars and ragged craters. Oddly shaped blocks of emitters are all failing at once.

This is a pattern that turns up with notable frequency: 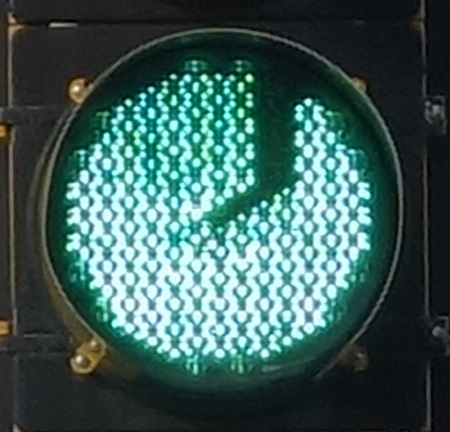 This one has three blocks of dead pixels: 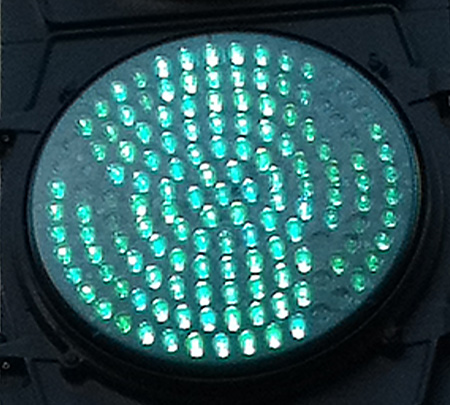 And here almost half the emitters have gone dark: 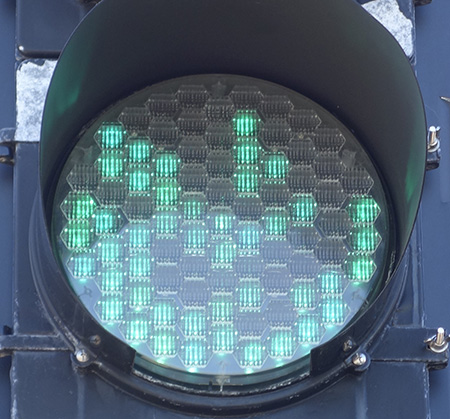 All three of the examples above are green signal lights, which seem to fail much more often than red and yellow ones. But here’s an example of a red light with more than 20 blacked-out pixels and several more dim ones: 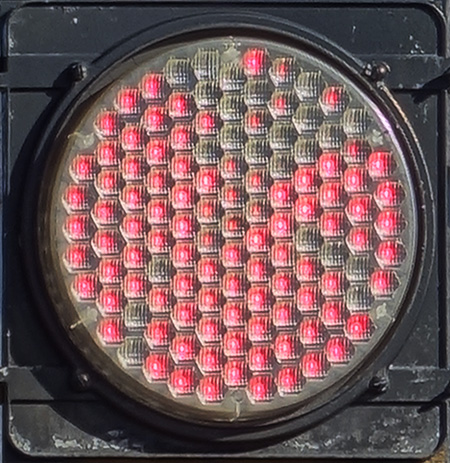 Finally, in another green light, a quite different and more orderly pattern of defects appears: 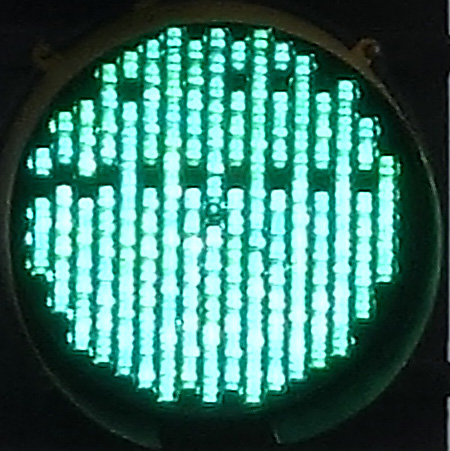 For me these images provoke a couple of questions. First, why do we so often see signal faces with a dozen or more LED failures, while single-pixel outages seem to be very rare? Second, what accounts for the distinctive shapes of the dark regions?

No doubt some diligent googling or wikipedia-wrangling would turn up some answers, but sometimes it’s just more fun to speculate in ignorance. In any case, I have a hypothesis about the first question. The idea comes from childhood experience with Christmas-tree lights. LEDs are generally low-voltage devices, but the available power supply in the traffic light is 120 volts. The cheapest and easiest way to deal with this mismatch is to wire groups of LEDs in series, thereby dividing the voltage. A consequence is that if any one LED in a group fails to an open-circuit state, the entire chain goes dark.

As for the geometric question, I haven’t got a clue. If I were laying out the circuit board, I would surely wind up with some collection of reasonably tidy, compact, symmetrical clusters. The patterns on exhibit here are not tidy, compact or symmetrical. The last of the images above might be explicable: Wiring together every other element in a row would be a good way of reducing the visual impact of a failure. But all the other patterns are incomprehensible.

Of course my whole Christmas-lights hypothesis may be totally screwy. I welcome alternative hypotheses, and even Google-Wiki-derived answers.

As a final bit of fun, here’s a video of an LED traffic signal shot at 1,000 frames per second, and slowed down by a further factor of 2, showing the 120-hertz flicker from the AC power supply, including the fade at the end of the green cycle.