The Kepler conjecture—the one about stacking cannonballs or oranges—is now the Hales theorem, though with a cruelly lingering asterisk. Thomas C. Hales announced his proof in 1998, and it was published in 2005 and 2006 (links). But the referees were unable to fully verify all the details, including some 5,000 nonlinear optimization problems solved by computer. Hales has continued to work on refinements to the proof, both simplifying the arguments and exploring formal methods of verification. 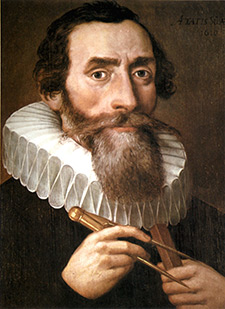 Johannes Kepler in 1610, an age of fanciful extravagance in collars and mustaches; from Wikipedia.

Over the years I’ve read parts of Hales’s proof, but I realized the other day that I had never looked at Johannes Kepler’s much earlier contribution to this discussion. It turns out that Kepler’s essay on the subject is a little gem, an amiable work by an affable fellow, showing a lively mind at play. The conjecture appears in The Six-Cornered Snowflake, a pamphlet pub­lished in 1611 and offered as a New Year gift to Johann Matthäus Wacker von Wackenfels, who was then Kepler’s patron. Apparently Wacker was more than a moneybags; he had studied law in Strasbourg and Geneva, took a doctoral degree in Padua, and had literary interests. Kepler’s essay includes a lot of learned banter addressed to Wacker, suggesting the two men may have been genuine friends. Some of the jokes involve bilingual puns—Latin and German.

Kepler’s main subject, as you might well guess from his title, is the hexagonal symmetry of snowflakes. He writes:

There must be some definite cause why, whenever snow begins to fall, its initial formations invariably display the shape of a six-cornered starlet. For if it happens by chance, why do they not fall just as well with five corners or with seven? Why always with six…? 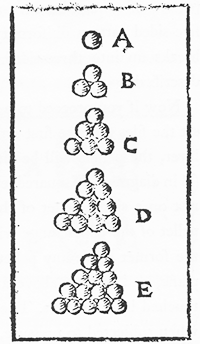 The idea we now know as the Kepler conjecture is introduced in one of several speculative attempts to solve this puzzle. Kepler describes the familiar stack-of-cannonballs geometry for packing spheres and then makes a bold claim about it, phrased not as a conjecture but as a fact that stands on its own, without need of demonstration: “The pack­ing will be the tightest possible, so that in no other arrangement could more pellets be stuffed into the same container.” The only alter­native he considers is the simple cubic lattice. He does not calculate the actual density of either lattice (\(\pi/\sqrt{18}\) vs. \(\pi/6)\). In the woodcut above, Kepler deconstructs a tetrahedral heap of 35 spheres into five horizontal layers; he clearly understood that the packing could be extended throughout an unbounded volume of space.

From the cannonball packing, Kepler passes on to other themes, including the arrangement of seeds in a pomegranate, the hexagonal cells of honeycombs and the symmetries of flowers (often fivefold); this last subject presents an opportunity for a further digression on the golden ratio and the Fibonacci numbers. But when Kepler finally returns to the snowflake, none of these ideas offers much help, and he is left with still more questions:

I will grant that, as flakes fall from above through steamy air, some incrustation on the plumes can occur from the vapor that comes in contact with them. But why at six points? What is the origin of the number six? Who carved the nucleus, before it fell, into six horns of ice? What cause is it that prescribes in that surface, which is now in the very act of condensing, six points in a circle for six prongs to be welded to them?

At this point Kepler comes up with a charming and highly creative idea, which also happens to be utterly preposterous. He proposes that snowflakes have six points because space has three dimensions:

While these starlets are falling, they consist of three feathered diameters, joined crosswise at one point, with their six extremities equally distributed in a sphere; consequently they fall on only three of the feathered prongs, and tower aloft with the remaining three, opposite those on which they fall, on the same diameters prolonged, until those, on which they rested, buckle, and the remainder, until then upright, sag onto the level in the gaps between them.

In other words, a pristine snowflake is not a planar hexagonal shape but a three-dimensional structure rather like a toy jack, with components aligned along three Cartesian coordinate axes. The flake collapses into a flat, six-pointed configuration only when it falls to earth. According to this theory, the number six is not something arbitrary or accidental but a direct consequence of the way the universe is put together.

Kepler did not have the vocabulary of Cartesian coordinate systems to describe his idea—Descartes would not invent it until 20 years later, incidentally after reading The Six-Cornered Snowflake—and so Kepler had to adopt a more roundabout description:

But is this perhaps the cause of the three diameters, that there is the same number of dimensions in animals? After all they have upper and lower parts, front and back, left and right.

Almost half of Kepler’s essay is given to the defense of this three-dimensional hypothesis, and then, at the end, all of his speculation is spoiled by a conflict with cold, wet reality:

For as I write it has again begun to snow, and more thickly than a moment ago. I have been busily examining the little flakes. Well, they have been falling, all of them, in radial pattern, but of two kinds: some very small with prongs inserted all the way round… But scattered among them were the rarer six-cornered starlets of the second kind, and not one of them was anything but flat, whether it was floating or coming to earth, with the plumes in the same plane as their stem.

In the end Kepler abandons his inquiry without reaching any conclusion. He throws the problem out for the chemists and physicists to solve—which they did, three centuries later.

Scientific discourse has changed a great deal in the past 400 years. When Hales wrote up his proof of the Kepler conjecture, he did not include jocular asides to his program officer at the National Science Foundation. And we don’t see a lot of published papers these days that end with the admission, “I have not yet got to the bottom of this.” The negative capability that Kepler embraces is part of what makes his essay so appealing.

I read the Kepler essay in an edition published in 1966, which prints the Latin text and an English translation on facing pages:

Kepler, Johannes. 1966. The Six-Cornered Snowflake. Edited and translated from the Latin by Colin Hardie, with essays by L. L. Whyte and B. F. J. Mason. Oxford, U.K.: Oxford University Press.

There’s also a more recent edition, which I have not seen, from a small publishing house in Philadelphia:

Update: Paul Dry Books has kindly sent me a copy of their edition, which is a charming small volume. In addition to the Gingerich and Bleichmar essays, it has extra illustrations and a poem by John Frederick Nims typeset in stellate verses.