Here in the Boston area our first storm left a particularly magical landscape. Glistening flakes fell steadily all night, with little wind, so that every fencepost was topped by a fluffy white pompom in the morning. The decorations were remarkably regular and symmetrical. In the photo below I have carved a cross-section out of the snow lying atop the back-porch railing, which is 3½ inches wide. 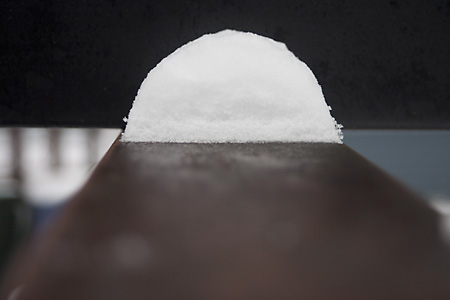 The profile looks like a fairly good approximation to a semicircle. (Below is a red semicircle fitted to the image by eye.) 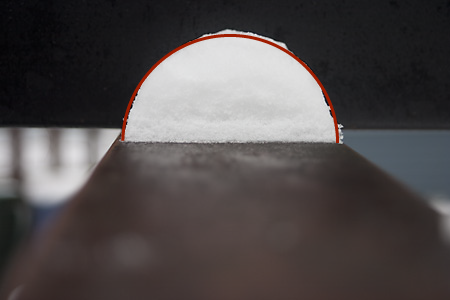 Later, I began wondering why the snow would assume just this shape. Is it an equilibrium form that would be maintained indefinitely if the snowfall continued? Is there some deep and universal reason for the semicircular form, or is it just an accident, a matter of contingency, something peculiar to this snowfall but nothing to generalize about. Semicircular distributions are not all that common in nature. They turn up in the distribution of eigenvalues of certain random matrices, but that seems a pretty far-fetched explanation for the lumps of snow on my back porch.

I would expect the profile to vary somewhat with the properties of the snow—moisture content, size and form of the flakes, etc.—but I’m not at all sure just how it would vary. In the past 20 years there’s been lots written about the self-organized shape of sand piles, which are essentially conical in profile. Clearly, snow is not sand. It’s fluffier and stickier. A flake doesn’t necessarily have to be supported from below. It could adhere to a surface, perhaps with probability given by some function of the cosine of the slope….

That’s as far as I’d gotten when the next storm hit. 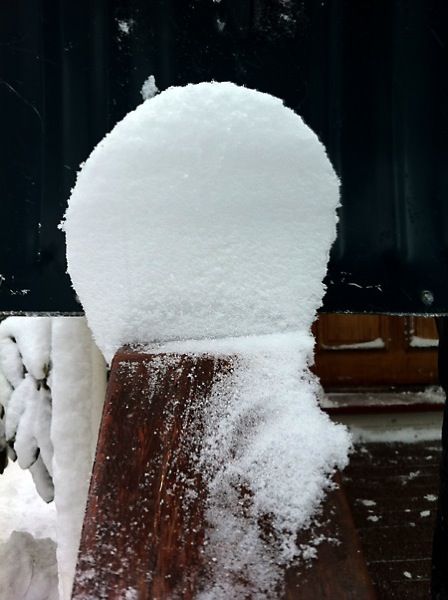 Perhaps I should note that my boyish joy at the first snowfall tends to dissipate as the winter wears on.

This entry was posted in mathematics, physics.