As a high school kid in the 1960s, I wrote a snarky term paper arguing that retirement is wasted on old people. By the time you get your promised years of leisure, you’re too worn out to enjoy them. So I proposed a new order of working life: Everybody gets five or ten years off at the start, when they’re still full of spunk, in exchange for a promise to keep trudging away on the treadmill right up to the end.

I wasn’t able to arrange such a pretirement for myself, but the world now seems to be coming around to my way of thinking. Here’s some evidence, with data courtesy of the Bureau of Labor Statistics: 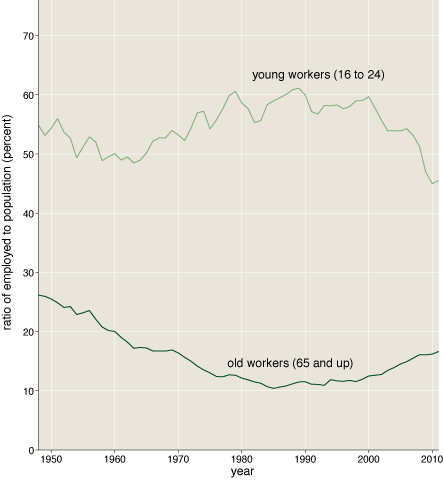 The proportion of Americans who stay on the job after age 65 was falling steadily for many years and got down to about 10 percent in the 1980s; but it has been rising since then, and the rate of increase accelerated after 2000. Today almost 17 percent of the 65+ cohort are still working. Meanwhile, the analogous curve for youths aged 16 to 24 is pretty much a mirror image. The employment rate peaked in the 1980s and has been declining since then. In the years between 2000 and 2010 it fell from just under 60 percent to 45 percent.

My pretirement hypothesis—the notion that we’re giving people an opportunity to waste their youth on the golf course rather than their old age—is just about the most benevolent interpretation one could possibly put on these trends. A less-rosy reading of the same data puts the blame on old geezers like me who just won’t get out of the way and give the youngsters their turn. For some reason, this view seems to be prevalent among recent grads who expected a job offer at the end of their studies but instead got only a bill from Sallie Mae.

An op-ed piece in the Sunday New York Times takes issue with this sour diagnosis. Edward L. Glaeser, an economist at Harvard, argues that what motivates the elders who linger in the work force is not greed, selfishness or indifference to their children’s aspirations; it’s economic necessity. Their houses are underwater; their 401k’s have swooned; they can’t afford to retire. Furthermore, the kids should be grateful that grandmom and grandpop have hung on to the family business:

It’s counterintuitive, but the forever work life of older Americans may turn out to be a good thing for young workers…. Recent studies in Britain and Germany find a positive correlation between labor-force participation among the elderly and youth employment. It’s not that older workers never crowd out younger workers, but there are myriad ways in which older workers also increase employment among the young. As older workers earn more, they can afford to buy more products produced by the young. Older workers may be entrepreneurs who employ younger workers, and they may pass along valuable skills to the young.

America has a terrible youth unemployment problem…. We have reason to worry that the current economic slowdown will create a lost generation of Americans who are now in their 20s. But it’s a mistake to imagine we can fix the problem of youth unemployment by encouraging older workers to retire.

According to Wikipedia, Glaeser, is 44 years old—right in the middle between the involuntary pretirees and the never-gonna-retirees.

Glaeser doesn’t discuss the demographic context of these changes, and neither did I in my high school term paper. Looking back on it now, I see a serious flaw in my proposal. Retirement plans, such as the Social Security system, work best with a pointy population pyramid, so that a wide base of young earners supports a smaller number of pensioners. My plan called for reversing the flow of resources, which would not have worked out well given the age structure of the U.S. population in the 1960s, with my own generation of Baby Boomers fattening the base of the pyramid. But the situation is different now; the pyramid is slimming down, and citizens in their 60s may soon outnumber those in their 20s. Maybe pretirement is worth a second look.