How I didn’t invent the memristor

The memristor is a new electronic component, an addition to the family of “passive” circuit elements—a family that for well over 150 years had just three members: the resistor, the capacitor and the inductor. Enthusiasts for memristor technology argue that it will bring higher-density, lower-cost, nonvolatile computer memory, with chips that hold terabits rather than mere gigabits. There’s also talk about “neuromorphic” computer architectures, where the memristor would play the role of a synapse in a nerve-like network. Of course these wonders are still in the future. While you’re waiting, you could visit the memristor web site, where you could buy a memristor tee shirt. Or you could read more about memristors in my new “Computing Science” column in American Scientist.

Will the memristor turn out to be a transformative technology, the key to putting hundreds of trillions of devices in the palm of your hand? Or will we be asking, a few years from now, “Whatever happened to the memristor?”

You won’t find an answer to that question in the column. You won’t find the answer here, either. Instead of trying to predict the future, I’m going to tell a story from the remote past, having to do with a different electronic device, the thermistor. There’s a connection with memristors, although it may take a while to emerge.

Once upon a time I was a nerd with a soldering iron who knew the resistor color code by heart. I had an older friend, Dave, an electrical engineer, whose confidence in my ability was inspiring and empowering even though it was also misplaced. Dave’s company had built an oven for drying the ink on silk-screened fabrics. The customer wanted to monitor the temperature of the cloth as it moved through the oven. Dave gave me the contract to design and build a suitable instrument.

I considered doing it with thermocouples, which I had played with in a physics class. But thermocouples measure the temperature difference between two points, and I had no way to provide a stable reference temperature for the cold junction. Besides, thermocouples produce signals in the millivolt range, and I worried about stray currents in an environment where electric heating elements were drawing about 20 kilowatts. So I turned to a different temperature-sensing device, the thermistor, which has a history going back to Faraday but still seemed to be slightly exotic in the 1960s.

A thermistor is a resistor with an unusually large temperature coefficient—that is, the electrical resistance changes dramatically with temperature. Furthermore, in all the thermistors available in those days, the coefficient was negative, meaning that the resistance decreased as the device was heated. (This is the reverse of the relation in most materials.) 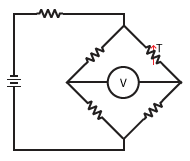 I designed a bridge circuit something like the sketch at right, where the T labels the thermistor and the other resistances are ordinary, fixed resistors. Component values are lost to memory, but I think the supply voltage was 12 or 18 volts and the voltmeter in the middle of the bridge read 5 or 10 volts full scale. The baseline thermistor resistance was a few hundred ohms—dropping from maybe 500 ohms to 250 over the temperature range of interest. I chose the fixed resistance values so that the bridge would balance somewhere below room temperature and produce full deflection of the voltmeter at about 300 degrees Fahrenheit.

The components were ordered by mail from the Allied or the Lafayette Electronics catalog, whose long lists of part numbers and tables of specifications I drooled over in those days. When the package of hardware arrived, I wired up the shiny new parts. Amazingly, it worked. I did a two-point calibration by immersing the thermistor in an ice bath and in boiling water, and I drew a custom scale for the meter. I also lavished attention on a logotype identifying the manufacturer of the instrument; I think I created it with leftover decals from a model-airplane kit.

When it came time to install the gadget, all went well at first. We got a room-temperature reading, then we turned the oven on and watched the needle move slowly across the scale. But later I began to notice a troubling anomaly. The needle kept rising even when the fabric temperature should have stabilized. A few more experiments showed that even with the oven cold, the indicated temperature would very slowly climb to 100 degrees or so, then accelerate on the way up to 150 degrees, and after 10 minutes would be at the top of the scale.

It was a wrenching moment when I realized what was the matter. In designing the bridge circuit I had successfully worked out various applications of Ohm’s Law: E = IR. But I had forgotten all about W = I2R, which defines the power dissipated by current flowing through a resistance. The 10 or 20 milliamps flowing through the thermistor were enough to heat it, thereby lowering its resistance and increasing the current further, bringing still more heating and more current, in a positive feedback loop. I had not observed this behavior in the calibration runs because the water bath efficiently carried away the heat. But the self-heating effect rendered the whole apparatus useless in the fabric-drying oven.

In retrospect, I can look upon this phenomenon and say: How interesting! What a pretty demonstration of nonlinear dynamics. Maybe one could even find a way to put the nonlinear effect to good use, for example by creating a bistable system with low- and high-resistance attractors.

A year or two before these events, a comprehensive review article, “Theory and Application of Self-Heated Thermistors,” by M. Sapoff and R. M. Oppenheim, had appeared in Proceedings of the IEEE (Vol. 51, October 1963, pp. 1292–1305), which set forth exactly these possibilities. If I had read and understood that paper, I would have saved myself a lot of bother. But I knew nothing of the article at the time; indeed I learned of it only a few weeks ago, when I found it cited in various works on memristors.

The foundation paper on the memristor itself appeared just a few years after my mortifying experience with the fabric-drying oven. The article is: “Memristor—the missing circuit element,” by Leon O. Chua, IEEE Transactions on Circuit Theory Vol. 18, September 1971, pp. 507–519 (available online through a link here). Chua, then and now at UC Berkeley, conceived of the memristor and gave it a name almost 40 years before a hardware implementation was discovered and understood in 2008 by R. Stanley Williams and several colleagues at Hewlett-Packard. In the interim, Chua described several memristor-like circuit elements, the first of them being the thermistor.

A memristor is a special kind of nonlinear, variable resistor—one whose resistance at any given moment depends on the entire history of currents and voltages it has experienced in the past. Under conditions where self-heating is important, a thermistor has this very property. As Chua put it in a 1976 paper: “[A] thermistor is in fact not a memoryless temperature-dependent linear resistor—as is usually assumed to be the case—but rather a first-order time-invariant current-controlled memristive one-port.” If only I had known.

So, in the light of history, I return to that teenage kid with good soldering skills but a somewhat shaky grasp of circuit theory. Was he on the verge of inventing the memristor ahead of Chua? No, sadly, not at all. This was not a near miss. At the time, I saw nothing in the outcome of my experiment but a humiliating failure. Looking back, though, I’m inclined to go easy on myself for that missed opportunity. I did manage to understand where I’d gone wrong; I just couldn’t see how to turn my goof into a gold mine.

By the way, the silk-screening outfit did eventually get their temperature monitor. Dave found an off-the-shelf solution, which turned out to work just like my design, but with higher resistances and lower currents, ducking below the thermistor’s region of nonlinear self-heating.

This entry was posted in science, technology.

3 Responses to How I didn’t invent the memristor