I’ve let the tropical mathematics bandwagon pass me by. It’s not that I’ve been unaware. I noticed the stream of preprints, the special session at a joint mathematics meeting a few years back, workshops in Palo Alto and Moscow, upcoming events in Montreal and Berkeley. I’ve noticed all this, but I’ve been resisting it. Maybe it was the term “tropical” that put me off—a little too whimsical, with too-deliberate designs on my curiosity. But now the tropical craze has made it to the cover of Mathematics Magazine, with a lead article by David Speyer and Bernd Sturmfels (preprint version available here). I guess it’s finally time for me to figure out what the fuss is all about. The notes below—a work in progress—trace my efforts to do so. 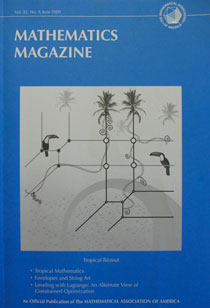 For starters, what is that word “tropical” supposed to mean? Speyer and Sturmfels explain: “The adjective tropical was coined by French mathematicians, including Jean-Eric Pin, in honor of their Brazilian colleague Imre Simon.” Pin, in a 1998 paper (.pdf), deflects the credit to another French mathematician, Dominique Perrin, again noting that the name honors “the pioneering work of our brazilian colleague and friend Imre Simon.” Simon himself, in a 1988 paper (.ps), attributes the term to yet a third French mathematician, Christian Choffrut. Apparently, no one wants to lay claim to the word, and I can’t entirely blame them. Speyer and Sturmfels go on: “There is no deeper meaning in the adjective ‘tropical’. It simply stands for the French view of Brazil.”

The fundamental objects in the tropical world are the real numbers \(\mathcal{R}\) augmented with \(\infty\), and two operations on those numbers, tropical addition, denoted \(\oplus\), and tropical multiplication, \(\otimes\). Tropical addition is simply the minimum operation; that is, a \(\oplus\) b is equal to the lesser of a and b. For example:

Tropical multiplication is equivalent to addition in conventional (non-tropical) arithmetic: a \(\otimes\) b = a + b. Some examples:

So that’s the key idea in a nutshell: plus is min and times is plus. This looks like a fairly strange and arbitrary reshuffling of definitions. First we get rid of addition, then we bring it back but call it multiplication. Why not just leave addition alone and redefine multiplication as min? There is a reason for doing it the other way around. In tropical arithmetic, the min operation \(\oplus\) plays the same role that addition plays in ordinary arithmetic, and \(\otimes\) has the same role as multiplication. In particular, consider the distributive law:

This rule holds correctly when \(\oplus\) is min and \(\otimes\) is +, but it wouldn’t work if the definitions were swapped. The commutative and associative laws are also valid in tropical arithmetic. Speyer and Sturmfels point out that the system even fulfills “the Freshman’s Dream”:

On the other hand, there’s trouble with subtraction. No value of \(x\) can satisfy an equation such as \(x \oplus 2 = 5\). Because of this asymmetry, the algebraic structure of tropical arithmetic is classified as a semiring (whereas ordinary arithmetic on \(\mathcal{R}\) is a ring). Here’s another bit of jargon for jargon’s sake: the tropical semiring is idempotent. This just means that \(a \oplus a \oplus a \oplus … \oplus a = a\).

And now you ask: What’s it all good for?

As I understand it, Imre Simon and those French mathematicians who take a tropical view of Brazil were interested in the tropical semiring mainly in connection with automata theory. The idea goes something like this. A finite-state automaton can be represented as a directed graph, where the nodes of the graph are states of the machine and the edges are transitions between states. Suppose the edges are assigned numeric labels, and a path from an initial state to a final state accumulates the sum of all the edges traversed along the way. There may be multiple paths that connect the same initial and final nodes, and so it makes sense to ask which of these paths has the minimal sum. These questions are conveniently addressed in the algebra of tropical arithmetic, where the summation of the labels is the tropical product \(\otimes\) and the taking of a minimum is the tropical sum \(\oplus\). (Expressing the rules in a formal algebra rather than an ad hoc convention helps with certain proofs about the automata.)

Automata theory may be where it all began, but the current interest in tropical mathematics seems to have a different focus. The emphasis has shifted to algebraic geometry—an area of mathematics that I look upon with equal parts of fascination and fright. The main aim in this realm is to understand the solution sets of polynomial equations.

If you plot the values of an ordinary polynomial, you get a smooth curve. The graph below at right shows the simple quadratic function \(y=2x^2+x-1\) with its 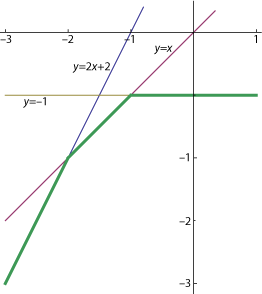 Thus the exponent in the original equation becomes the integer coefficient that determines the slope of a line. The graph of the tropical polynomial is shown at left. The green line traces the complete function \(y=2x^2 \oplus x \oplus -1\); it is the union of segments and rays drawn from the three lines \(y=2x+2\), \(y=x\) and \(y=-1\). For each value of \(x\), the function takes on the least value of \(y\) that lies on one of these lines (the “lower envelope” of the lines). Graphs of all tropical polynomials share this same basic appearance: They are piecewise linear functions and they are always concave downward.

The constants –2 and –1 appearing in these factors correspond to the “bend points” in the graph of the function, and they play a role analogous to the roots of the ordinary polynomial. They are values of the variable \(x\) where two or more of the linear constraints are simultaneously satisfied. The locus of all such points is the solution set, the object of particular interest to the algebraic geometers.

For a polynomial in one variable, the solution set generally consists of isolated points. The situation gets hairier in higher dimensions, where the solution sets become algebraic “curves”—though they sure don’t look very curvaceous. Take the two-variable tropical polynomial function \(z(x,y) = x^2 \oplus y^2 \oplus 1\). The three terms of the polynomial define three planes in \(\mathcal{R}^3\), and the value of the function is the lower envelope of these planes: 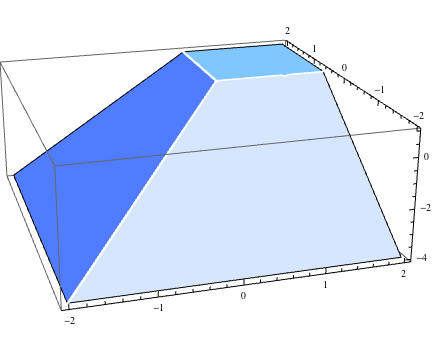 The “bend points” are now “bend lines” where the planes intersect. Projected onto the \(x,y\) plane, this tropical “curve” has a distinctive Y-shaped form. 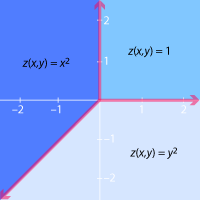 At right, the rays in red represent the solution set. They divide the plane into three regions, in each of which a different linear relation has minimal height; the rays themselves define the locus of points where two (or, at the origin, all three) of the terms are minimal. This trident motif is preserved in all tropical curves, not just this simple example. The illustration on the cover of Mathematics Magazine shows a more complicated graph, part of a proof of the tropical version of Bézout’s theorem. (The theorem states, with various caveats, that two algebraic curves of degree m and n intersect in mn points. If I understand correctly, it carries over fully from “temperate” to tropical mathematics.)

The mere idea of reconstructing all of arithmetic with different operations, and then building higher-level structures (algebra, geometry) on top of this new foundation—all that’s enough fun to justify the project. But it seems there are also practical applications. Speyer and Sturmfels discuss a biological problem: Given genetic sequences that define pairwise distances between species, construct a phylogenetic tree showing the evolutionary history of the species. Tropical arithmetic turns out to be useful in finding a tree where all the distances are metrically consistent—that is, they obey the triangle inequality.

That’s about as far as I’ve been able to get in my explorations of the tropical latitudes. But in closing I’d like to say another word about the naming of things in science and mathematics. My sober, fuddy-duddy opinion is that we’d be better off in the long run giving things plain, descriptive names, without too much metaphorical spin on them. Physicists once had a lot of fun with quarks and gluons, charm and strangeness, infrared slavery and ultraviolet freedom; but eventually the joke wears thin. I gather that biologists are now regretting the game of giving genes names like Sonic Hedgehog. Tropical mathematics may also get tired of explaining over and over again about “the French view of Brazil.” On the other hand, I have to admit that if all those papers and workshops had talked about min-plus algebra, they never would have caught my eye.