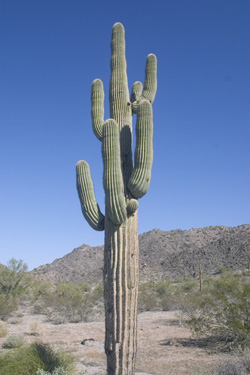 I’ve been Way Out West for the past few days, exploring a desert landscape where everything bristles. Ros and I went walking in the foothills of the Santa Catalina range, north of Tucson. At one point along the trail we spotted a pair of tweezers someone had left behind near the base of a prickly pear. Those lost tweezers told their own story—a painful one. We hadn’t thought to pack such implements; later, a more experienced hiker told us that what you really want to take along are not tweezers but pliers.

The iconic cactuses of southern Arizona are the towering saguaros. They are magnificent plants, but I also find them a little clownish, with their limbs attached like sausages or knotted balloons.

On our stroll through the desert I was taking particular note of the saguaros’ rib patterns. As we later learned, the ribs work like accordion pleats, allowing the plant to expand its girth when it absorbs water after a rainfall. The ribs and their intervening grooves form vertical stripes, most of which extend the full length of the main trunk or an arm. Every now and then, however, an extra rib appears out of nowhere, like this: 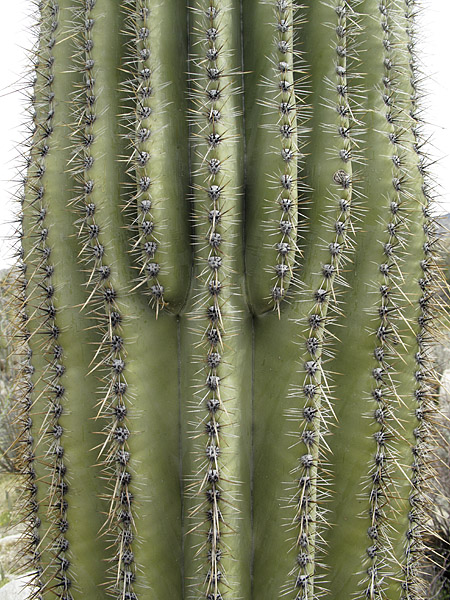 What sort of developmental algorithm can generate a pattern like this? It looks like a textbook example of a mechanism discussed almost 60 years ago by none other than Alan Turing. Imagine clusters of specialized plant cells that secrete some chemical substance—a morphogen—that induces other cells to form a spine-crested ridge. Surrounding the growing tip of the plant is a necklace of such morphogen-secreting clusters, creating long parallel ridges as the trunk elongates, much like cake frosting extruded from a fluted nozzle. This is a self-organizing and self-maintaining process. The morphogen clusters (and the ridges) remain evenly spaced because each secreting group of cells inhibits all nearby cells from secreting the substance. Thus the morphogen sites act as if they have coiled springs keeping them equidistant. As the cactus grows taller, however, it also increases in circumference, spreading the clusters apart. When two adjacent morphogen sites are too distant to suppress activity between them—or in other words when the coiled spring no longer exerts a repulsive force—a new morphogen cluster can form spontaneously in the gap. The result is a new rib arising midway between two existing ribs.

After examining a few dozen saguaros we passed along the trail, I thought I understood the biology of the rib patterns. New ribs arise like mountains out of a valley floor, and so the valley itself must bifurcate, passing to the left and right of the new ridge. The fork where the valley splits always has its tines pointing upward. Thus when you trace along the epidermis of the cactus from ground level to the top of the plant, new ridges appear spontaneously from time to time, but existing ridges never disappear.

Those hypotheses lasted a kilometer or two. Then we came upon the cactus in the photograph below: 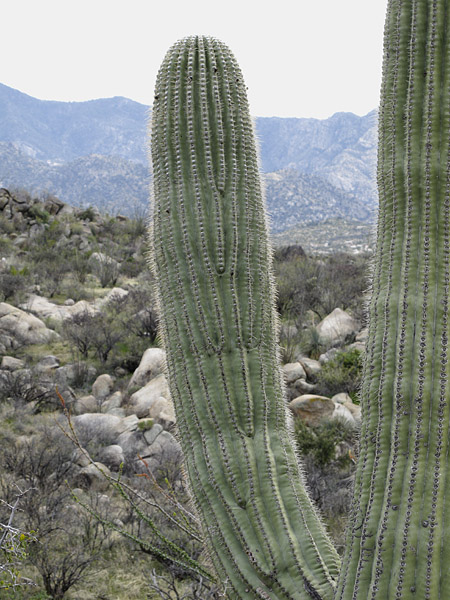 This saguaro has both bifurcating valleys and bifurcating ridges (along with a couple of doubtful cases where it’s not entirely clear whether the ridge or the valley is doing the splitting). The idea of morphogen centers separating and allowing a new cluster of cells to form between them cannot explain everything we’re seeing here; it appears that morphogen clusters are undergoing their own fission events as well. It’s not just the valleys that bifurcate but the ridges too.

A hundred meters farther along the trail, we found another exceptional cactus: 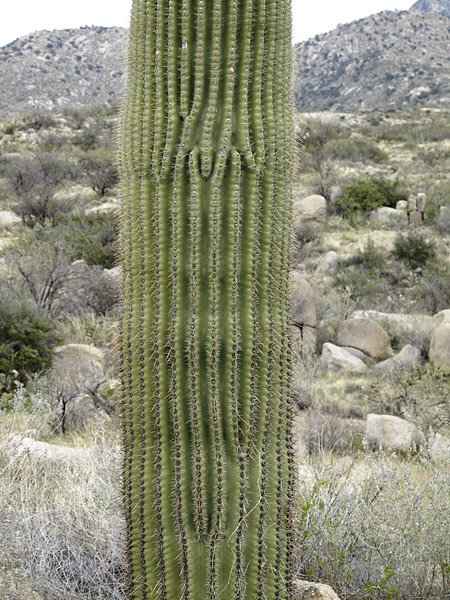 Here we have both forks and antiforks: As we proceed upward along the body of the cactus, ridges are both created and annihilated. Near the top of the image is a confused ring that includes several initiation and termination sites. Perhaps there was some disruptive event at that moment in the history of the plant’s growth. (Saguaros live for 150 or 200 years, so there’s plenty of history to play out.)

Bifurcating ridges can be explained in the same general way as bifurcating valleys, and so I suspect the saguaros are still good candidates for a model based on Turing’s ideas. But maybe the model is not quite as simple as I first thought. And the explanatory challenges get harder still. Elsewhere in the Tucson area, a fellow hiker drew my attention to this cactus: 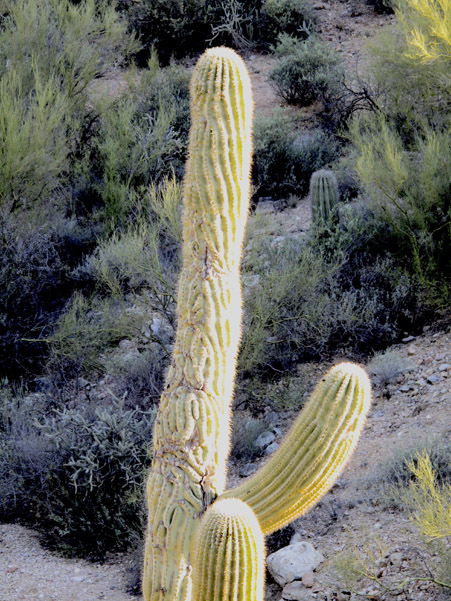 Or how about the unfortunate specimen pictured below? 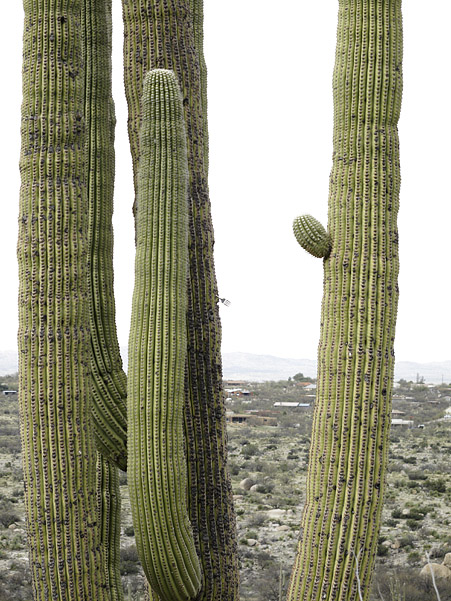 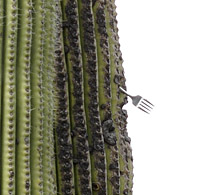 As the detail at left reveals, this one has a fork with its tines pointing neither upward nor downward. How the vandals managed to impale the cactus at such an elevation—the dinner fork is four or five meters off the ground—remains an unanswered question. But in the end it’s also not the most interesting question about these curious plants, which wear their algorithmic structure on their skin.