When I crossed over the great Ulam divide, I had the same sensation: One day precocious, the next superannuated. I suppose I must be exaggerating, or else deluding myself: The transformation from young twerp to old fart can’t really have happened overnight. Nevertheless, certain demographic trends can make the aging process seem more rapid than you might expect, especially when you judge your own age by looking at the people around you. As someone born in the middle of the last century, during an extraordinary population spurt, I grew up ridiculously fast.

My calendrical age, AC, is the number of years since I was born. Let’s define my relative age, AR, as the percentage of people in the world population whose calendrical age is less than mine. In other words, AR is my percentile in the world population age structure. (What about ages greater than 100? I’ll worry about that when I get there.) In the graph below, the wine-colored curve labeled “born 1950” shows my trajectory through age space, plotting AR as a function of AC for a person born at midcentury. 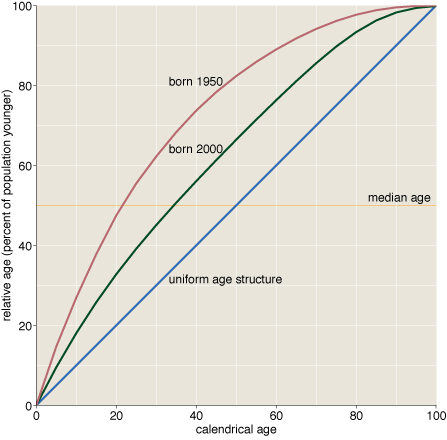 At the tender age of 10, I was already older than a fourth of all the people on the planet. I was in my early twenties when I crossed the median line—a relative age of 50—and thus moved from the junior to the senior side of life. When I got to AC = 30, I was at AR = 62, older than almost two-thirds of the population. Now, having reached my calendrical sixties, I’m in my relative nineties! But I guess age has its consolation: No matter how much longer I live, I can’t get much older, relatively speaking.

The population data underlying this curve come from United Nations estimates and projections, the same source I used in an earlier discussion of the population pyramid. Those numbers show the pyramid becoming more bullet-shaped as we move through the present century; by 2100 it begins to look more like an onion dome, with a base narrower than the midsection. At that point the youngest cohorts are no longer the largest, and the population has almost ceased growing, with about 10 billion people occupying the earth.

With these shifts in age structure, future generations will have their Ulam moments later in life, and perhaps the transition from youth to age will seem less abrupt. In the AR-vs.-AC graph above, the green curve traces a trajectory for my granddaughter born near the turn of the millennium. She won’t reach the population median until she’s in her mid-thirties, and going from AR 40 to AR 60 will take her almost twice as long as it took me.

The blue line in the graph is for the limiting case of a population with a perfectly uniform age structure, with equal numbers in every cohort. In this hypothetical society, everyone lives until their 100th birthday; then, as soon as they blow out the candles, they die. This population structure offers the mathematical convenience that calendrical age and relative age are exactly equal.

Quick quiz: Describe a society where the relative-age curve is concave upward.

I was led to these thoughts on aging and its demographic context by a reading of Joel Cohen‘s 1995 book How Many People Can the Earth Support? If you want an answer to that question, I must send you to the book itself, which treats this contentious subject thoroughly, thoughtfully and with exceptional grace and good humor. (And don’t skip the notes and appendices, especially the appendix on mathematics in demography, which is labeled “adult entertainment.”)

Here I want to pause over something that Cohen mentions in passing. He calls it Methuselah’s choice.

Discussions of population tend to focus on the birth rate and the death rate, which need to be in equilibrium if the total population is to remain fixed. But there’s a third factor that connects these two rates: longevity. In a stationary population—where the total number of people and the age structure are unchanging—birth rate, death rate and lifespan are all tightly constrained. Specifically, the average life expectancy at birth must be equal to the reciprocal of the birth rate or the death rate. This fact is easy to verify in our society of centenarians: Each year 1/100th of the people die, an equal number are born, and the life expectancy at birth is exactly 100 years. If we reduced the lifespan to 50 years, the birth rate and death rate would have to double to maintain equilibrium.

One way to clarify the influence of lifespan is to measure human fecundity not by counting births but by taking the product of births and life expectancy. Thus the unit of measure is person-years, a quantity that better represents how much spacetime each of us takes up in the world. Ten million births of future centenarians contribute a billion person-years to the human presence.

The reciprocal relationship of birth rate and lifespan suggests the possibility of trading one for the other. Cohen frames the question as a social choice:

Methuselah’s choice has a corollary. If people in a stationary population prefer long life and choose low fertility, like today’s rich countries, there will be many more old people and many fewer young ones than if they choose high fertility and short lives.

Note that Methuselah’s choice is not the same as the Malthusian choice. Malthus warns us about the danger of letting births exceed deaths in a world of finite resources. Cohen’s Methuselah tells us we still have a choice to make even when births and deaths are balanced. We have to choose our lifespan.

The idea that family size is a matter for deliberate planning is no longer a novelty, but the idea that lifespan is also an elective choice still seems strange. If you think of it not as a collective societal decision but as a strictly individual one, the whole business becomes rather nasty. Suppose you are allocated a birthright of 100 person-years to be bestowed upon your offspring as you see fit. You can choose to have a single child who will live to blow out the 100 candles, or two kids who will die at 50, or a dozen who will survive only as far as age 8. Under this regime I suppose we could all agree that the cheaper-by-the-dozen choice is monstrous. But does it follow that the opposite extreme of maximizing lifespan is the optimum trade-off? This seems to be the direction we’re heading. The consequence of that preference, as Cohen makes clear, is a world with more crabby old geezers and fewer bright young things.

Although I’m in no great hurry to make my own departure from life, I do think the future of humanity might be rosier if we spent a greater proportion of our available person-years in childhood and fewer in dotage, if we devoted more resources to teaching the young and fewer to propping up the old. But how do we get there from here, even if we could all agree on the most desirable compromise between fertility and longevity? Calling it a choice implies that we have some means to mold the world to our preferences; I don’t see such a mechanism ready at hand.

This entry was posted in mathematics, modern life, social science.