Several weeks ago, on the morning after the first winter storm here in the Boston area, I wrote about some peculiar snow geometry on porch railings. Now, following another storm (which I wish I could believe might be the last of the season), I have more puzzling snow shapes to present.

What gives rise to the quasi-periodic undulations in the snow filling my neighbors’ rain gutters? 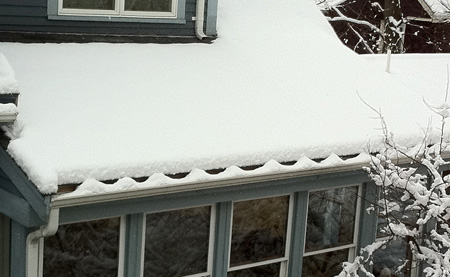 Note that on the roof above the gutter the snow depth appears to be perfectly uniform. The scalloped shapes appear only in the gutters.

Elsewhere on the same house, the waves are less regular in period and smaller in amplitude, but they are still clearly present.

On the opposite side of a different house I find more undulations, this time in the gutters draining a relatively flat porch roof.

All of the gutters shown above are oriented northwest-southeast, and were roughly parallel to the prevailing wind direction during the storm (although winds were very light). Gutters perpendicular to these revealed little or no evidence of wavelike disturbances. Waves were also absent from other linear surfaces, such as railings, regardless or orientation.

I’ve seen no sign of such wavelike formations in any previous snowfall this winter. To my eye, the waveforms are cusplike—cycloidal, perhaps, rather than sinusoidal. The snow was fairly heavy and sticky (note the coating on tree branches); temperatures were just a few degrees below freezing; total accumulation was about 10 cm.

Anyone care to propose a mechanism?

Update: After a welcome day of warm rain, the answer has slowly emerged from the wilting snow, and it has nothing to do with subtleties of fluid dynamics or particle deposition.

In the photo above, peeking out from behind the last remnants of the melting snowdunes, are the metal spikes and straps that fasten the gutters to the fascia board. Their somewhat irregular spacing is a good match for the pattern of cusplike peaks. Of course! How could I have failed to think of that?

Why did the dunes appear only in this storm? Earlier snows were fluffier and deeper, and probably less affected by the hanger straps. Why only on certain sides of the houses? I’m not sure about that, but the one duneless gutter I’ve been to able to examine closely has a different hanger system, without the obstructing straps.

This entry was posted in problems and puzzles, science.