The annual Joint Mathematics Meeting always charges my batteries. Here are few items from this year’s gathering in San Diego. 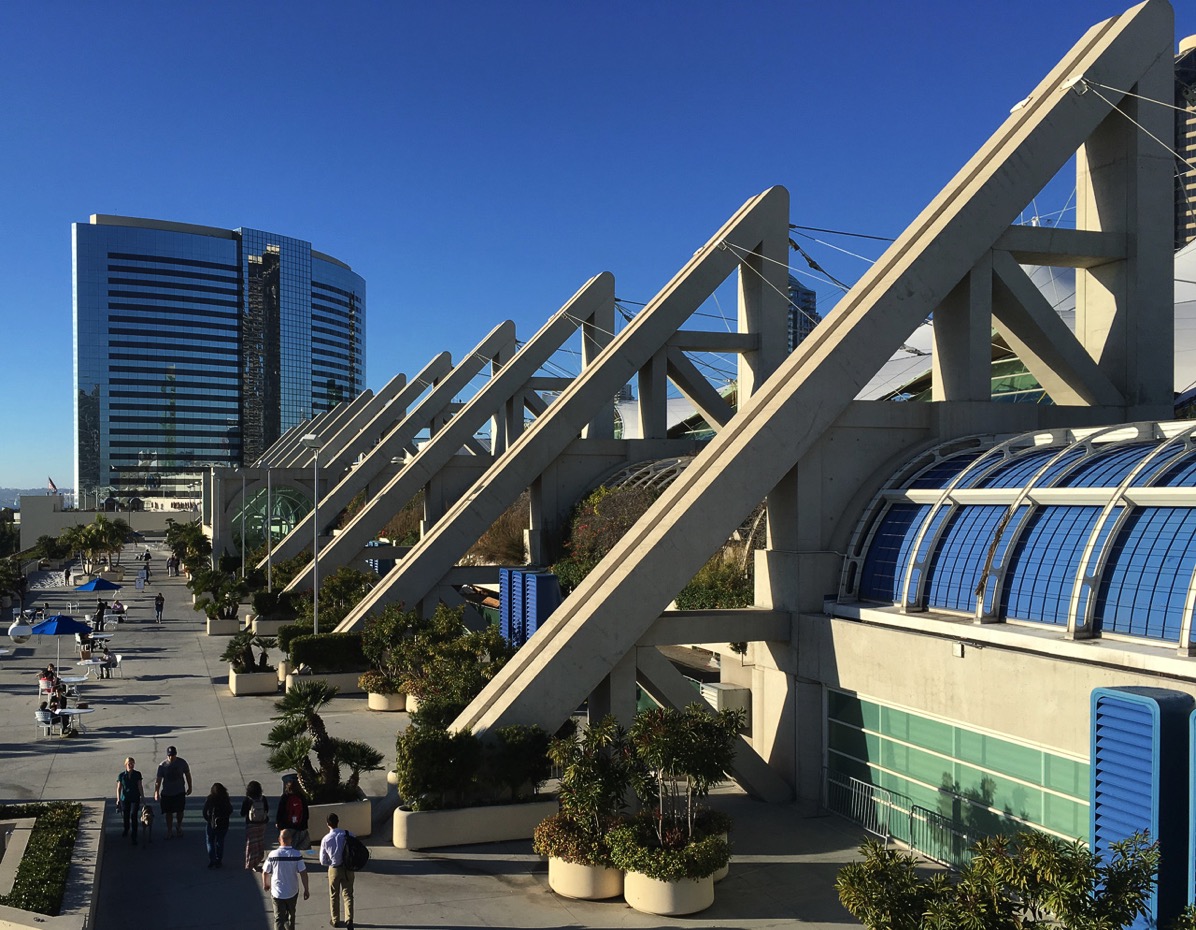 In 1994 a document called the QED Manifesto made the rounds of certain mathematical mailing lists and Usenet groups.

QED is the very tentative title of a project to build a computer system that effectively represents all important mathematical knowledge and techniques. The QED system will conform to the highest standards of mathematical rigor, including the use of strict formality in the internal representation of knowledge and the use of mechanical methods to check proofs of the correctness of all entries in the system.

The ambitions of the QED project—and its eventual failure—were front and center in a talk by Thomas Hales (University of Pittsburgh) on Formal Abstracts in Mathematics. Hales is proposing another such undertaking: A comprehensive database of theorems and other mathematical propositions, along with the axioms, assumptions, and definitions on which the theorems depend, all represented in a formal notation readable by both humans and machines. Unlike QED, however, these “formal abstracts” would not include proofs of the theorems. Excluding proofs is a huge retreat from the aims of the QED group, but Hales argues that it’s necessary to make the project feasible with current technology.

Hales has plenty of experience in this field. In 1998 he announced a proof of the Kepler conjecture—the assertion that the grocer’s stack of oranges embodies the densest possible arrangement of equal-size spheres in three-dimensional space. Hales’s proof was long and complex, so much so that it stymied the efforts of journal referees to fully check it. Hales and 21 collaborators then spent a dozen years constructing a formal, computer-mediated verification of the proof.

What’s the use of a database of mathematical assertions if it doesn’t include proofs? Hales held out several potential benefits, two of which I found particularly appealing. First, the database could answer global questions about the mathematical literature; one could ask, “How many theorems depend on the Riemann hypothesis?” Second, the formal abstracts would capture the meaning of mathematical statements, not just their surface form. A search for all mentions of the equation \(x^m - y^n = 1\) would find instances that use symbols other than \(x, y, m, n,\) or that take slightly different forms, such as \(x^m - 1 = y^n\).

Hales’s formal abstracts sound intriguing, but I have to confess to a certain level of disappointment and bafflement. All around us, triumphant machines are conquering one domain after another—chess, go, poker, Jeopardy, the driver’s seat. But not proofs, apparently.

Am I the last person in the whole republic of numbers to learn that Sperner’s lemma is a discrete version of the Brouwer fixed-point theorem? Francis Su and John Stillwell clued me in.

The lemma—first stated in 1928 by the German mathematician Emanuel Sperner—seems rather narrow and specialized, but it turns up everywhere. It concerns a triangle whose vertices are assigned three distinct colors:

Divide the triangle into smaller triangles, constrained by two rules. First, no edge or segment of an edge can be part of more than two triangles. Second, if a vertex of a new small triangle lies on an edge of the original main triangle, the new vertex must be given one of the two colors found at the end points of that main edge. For example, a vertex along the red-green edge on the left side of the main triangle must be either red or green. Vertices strictly inside the main triangle can be given any of the three colors, without restriction.

The lemma states that at least one interior triangle must have a full complement of red, green, and blue vertices. Actually, the lemma’s claim is slightly stronger: The number of trichromatic inner triangles must be odd. In the augmented diagram below, adding a single new red vertex has created two more RGB triangles, for a total of three.

Su gave a quick proof of the lemma. Consider the set of all edge segments that have one red and one green endpoint. On the exterior boundary of the large triangle, such segments can appear only along the red-green edge, and there must be an odd number of them. Now draw a path that enters the large triangle from the outside, that crosses only red-green segments, and that crosses each such segment at most once.

So much for Sperner’s lemma. What do these nested triangles have to do with the Brouwer fixed-point theorem? That theorem operates in a continuous domain, which seems remote from the discrete network of Sperner’s triangulated triangle.

As the story goes (I can’t vouch for its provenance), L. E. J. Brouwer formulated his theorem at the breakfast table. Stirring his coffee, he noticed that there always seemed to be at least one stationary point on the surface of the moving liquid. He was able to prove this fact not just for the interior of a coffee cup but for any bounded, closed, and convex region, and not just for circular motion but for any continuous function that maps points within such a region to points in the same region. For each such function \(f\), there is a point \(p\) such that \(f(p) = p\).

Brouwer’s fixed-point theorem was a landmark in the development of topology, and yet Brouwer himself later renounced the theorem—or at least his proof of it, because the proof was nonconstructive: It gave no procedure for finding or identifying the fixed point. John Stillwell argues that a proof based on Sperner’s lemma comes as close as possible to a constructive proof, though it would still have left Brouwer unsatisfied.

The proof relies on the same kind of paths represented by yellow arrows in the diagram above. At least one such path comes to an end inside a tri-colored triangle, which Sperner’s lemma shows must exist in any properly colored triangulated network. If we continue subdividing the triangles under the Sperner rules, and proceed to the limit where the edge lengths go to zero, then the path ends at a single, stationary point. (It’s the “proceed to the limit” step that Brouwer would not have liked.)

You have five muffins to share among three students; lets call the students April, May, and June. One solution is to give each student one whole muffin, then divide the remaining two muffins into pieces of size one-third and two-thirds. Then the portions are divvied up as follows:

This allotment is quantitatively fair, in that each student receives five-thirds of a muffin, but June complains that her two small pieces are less appetizing than the others’ larger ones. She feels she’s been given leftover crumbs. Hence the division is not envy-free.

There are surely many ways of addressing this complaint. You might cut all the muffins into pieces of size one-third, and give each student five equal pieces. Or you might give each student a muffin and a half, then eat the leftover half yourself. These are practical and sensible strategies, but they are not what Bill Gasarch was seeking when he gave a talk on the problem Saturday afternoon. Gasarch asked a specific question: What is the maximum size of the minimum piece? Can we do better than one-third?

Five-twelfths is larger than one-third, and thus should seem less crumby. Indeed, Gasarch and his colleagues have proved five-twelfths is the best result possible: It is the maximum of the minimum. (Nevertheless, I worry that June may still be unhappy. Her portion is cut up into four pieces, whereas the others get three pieces each; furthermore, all of June’s pieces are smaller than April’s and May’s. Again, however, these concerns lie outside the scope of the mathematical problem.)

A key observation is that the smallest piece can never be larger than one-half. This is thunderously obvious once you know it, but I failed to see it when I first started thinking about the problem.

Fair-division problems have a long history (going back at least as far as the Talmud), and cake-cutting versions have been proliferating for decades. A 1961 article by L. E. Dubins and E. H. Spanier (American Mathematical Monthly 68:1–17) inspired much further work. 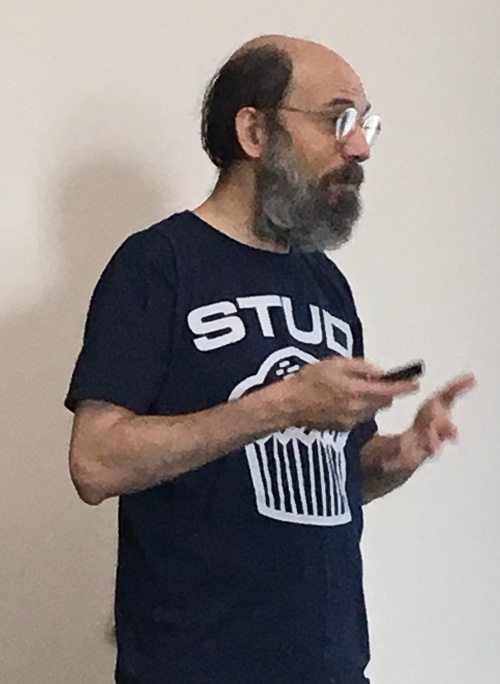 There are even connections with Sperner’s lemma. Nevertheless, the genre is not exhausted yet; the muffin problem seems to be a new wrinkle. Gasarch and six co-authors (three of them high school students) have prepared a 166-page manuscript describing a year’s worth of labor on the problem, with optimal results for all instances with up to six students (and any number of muffins), as well as upper and lower bounds on solutions to larger instances, and various conjectures on open problems.

Long-time readers of bit-player may remember that Gasarch has been mentioned here before. Back in 2009 he offered (and eventually paid) \($17^2\) for a four-coloring of a 17-by-17 lattice such that no four lattice points forming a rectangle all have the same color. That problem attracted considerable attention both here and on Gasarch’s own Computational Complexity blog (conducted jointly with Lance Fortnow).

Note: In the comments Jim Propp points out that the muffin problem was invented by Alan Frank. The omission of this fact is my fault; Gasarch mentions it in his paper. The problem’s first appearance in print seems to be in a New York Times Numberplay column by Gary Antonick. Frank’s priority is acknowledged only in a footnote, which seems unfair. I apologize for again giving him credit only as an afterthought.