Over the weekend, identical twin sisters Inez Harries and Venice Shaw both celebrated their 100th birthday in California. I heard about this on the TV news, where it was the human-interest teaser story. “What are the odds of that?” the anchorman asked. Then he promised: “We’ll do the math.” 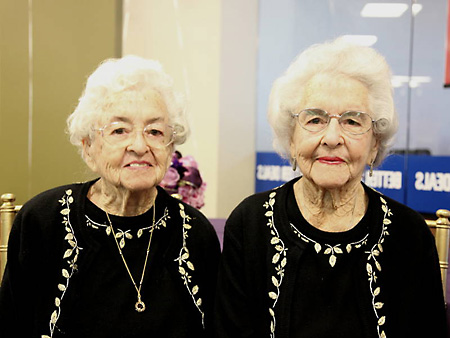 I stayed through the whole broadcast just to see them do the math, but in the end all they gave was an answer, without showing where the number came from: The odds are 1 in 700 million, they said. On the web I found other accounts of the Harries-Shaw birthday party that quoted the same figure, but they were no more helpful about the details of the calculation. One version cited “family members who researched the question.” Another story, discussing another pair of centenarian twins, attributed the number to a spokeswoman for Guinness World Records. I found no supporting information on the Guinness web site. Nevertheless, I suspect that Guinness is indeed the source of the number. An Amazon page for a 2002 edition of Guinness World Records includes the following statement:

The chance of identical twins both reaching and surpassing the age of 100 is about one in 700 million.

What does that mean, exactly? What the words seem to say is this: In a population of 700 million pairs of identical twins, we should expect to find approximately one pair in which both members survive to age 100 or more. (Or should it be 700 million twins, and thus just 350 million pairs?)

I suspect that the author of the sentence actually meant something different: In a human population of 700 million, we should expect to find about one pair of individuals who are identical twin siblings and who also both live to be 100 or more.

Even under the latter interpretation, I was skeptical of this number. My back-of-the-envelope estimates of the probability differed from the Guinness value by orders of magnitude. However, the back of my envelope is notoriously unreliable, especially when it comes to calculating probabilities. I might well have blundered.

Here are some numbers pertinent to the calculation:

And here’s how I figured it. Among the 2.8 million births in 1911, there should have been about 11,000 pairs of monozygotic twins. We want to know how many pairs have survived to 2011. We can get an individual survival rate either from the Social Security actuarial table or from the Census Bureau’s count of surviving centenarians. The two coefficients differ substantially—0.014 vs. 0.025—probably because the Census count includes the effect of net immigration. Let’s split the difference and say that 0.02 of the cohort has survived to age 100. Since we are tracking the simultaneous survival of pairs of individuals, we want the square of this number—0.0004. Multiplying the initial number of twin pairs by this factor suggests there should be four or five pairs surviving today. The odds I calculate are roughly 1 in 600,000, not 700 million.

Lacking all faith in my own competence to do the math, I checked my calculation with a simple-minded computer run. I set up a vector of 2,809,000 bits, designated 11,191 pairs of them as identical twins, killed off bits at random until only 2 percent remained, and finally counted the pairs left standing. In a thousand runs I came up with a mean of 2.23 pairs (and a standard deviation of 1.45). The result of my earlier calculation was 4.48 pairs—just double the simulation outcome. Where did I go wrong? I had been careful to count pairs rather than individual twins in the hope of avoiding just this kind of confusion. But then I went and counted each pair twice! In effect, I was counting Venice and Inez as well as Inez and Venice. Sigh.

Even after correcting my flub, this computation should not be taken too seriously. It neglects a bunch of not-so-subtleties. In particular, I am pretending that the probabilities of all events are independent, when in fact the longevity of identical twin siblings is doubtless very highly correlated. But taking those correlations into account would make the discrepancy between my result and Guinness’s even wider.

My arithmetic—if I have finally done it right—suggests twin-survival odds of roughly 1 in 1.2 million. How did Guinness (or whoever?) come up with 1 in 700 million? My best guess is that they based their calculation on global demographic estimates rather than regional or national statistics. By tweaking the numbers, I can come fairly close to their result.

A U.N. report on aging estimates there are 455,000 centenarians worldwide. The global population in 1911 was apparently somewhere near 1.76 billion. To estimate the cohort size in 1911 we’d need to know the crude birth rate, which I have not been able to ascertain, but extrapolating backward from estimates for later years suggests something in the range of 50 births per thousand people per year. Running these numbers through the mill yields an estimate of 4.7 twin pairs worldwide, or odds of 1 in 375 million.

If I were to boost the 1911 birth rate a little higher, I could arrive at the curious prediction that there are more centenarian twins living in the U.S. than there are on the entire planet. This result does not inspire confidence in the methodology, but it’s also not really surprising. We’re dealing with events far out in the upper tail of a normal distribution. Including populations where the mean age at death is 48 rather than 78 adds more noise than information.

In any event, I toast Inez and Venice on this occasion. And I am happy to note that they are not alone. In rooting around on the web, I’ve found another way to put a lower bound on the twin survival rate. News reports published within the past few months mention other pairs of twins celebrating 100th birthdays in Alabama, Florida and Rhode Island. That makes at least four 700-million-to-1 events in a country of 300 million. Farther afield, there are also recent stories about pairs of centenarian twin sisters in Belgium and the U.K. And Wikipedia has a list of 16 such pairs (not all monozygotic) thought to be still living. Double congratulations to all of them.

7 Responses to The prime twins conjecture