The Handbook of Mathematical Functions with Formulas, Graphs, and Mathematical Tables (better known as Abramowitz and Stegun) is a much-storied book. Not that it’s a book full of stories; truth is, there’s not much of a narrative thread running through those formulas, graphs and mathematical tables. But it’s a book with a story behind it.

The story began in the late 1930s, when the Mathematical Tables Project was launched in a factory building on the West Side of Manhattan. Supported by the Works Progress Administration, the Tables Project had dual aims: first, preparing high-quality tables of trigonometric functions, logarithms, and the like; and, second, providing work for unemployed New Yorkers. The 450 human computers hired for the project were chosen more on the basis of need than skill, and the work was done on a kind of numerical assembly line. According to David Alan Grier:

Each group was taught to perform a single arithmetic operation. One group knew how to add positive numbers, a second to subtract, and the third to multiply single digits. The last and most sophisticated group did long division.

I have to admit there’s a certain nightmare aspect to this scene. Working in a numbers factory sounds no more appealing than stamping sheet metal all day, although there was less danger of getting a finger crushed in the machinery.

A few years later, the Tables Project was swept up in war work; then, afterward, many of the key personnel moved to the National Bureau of Standards (now NIST, the National Institute of Standards and Technology). There they conceived the Handbook. Apparently the initial plan was a greatest-hits album of tables, but by the early 1950s the future of table-making was looking pretty dim. And so the project changed course and put more emphasis on the mathematical functions that lay behind the tables—familiar functions such logarithms, more specialized ones such as Bessel functions and some more recondite topics such as Mathieu functions and orthogonal polynomials. There were still tables listing numeric values of functions, but the Handbook also presented the mathematics you would need to evaluate (or approximate) the function for yourself.

The editors in charge of the Handbook were Milton Abramowitz and Irene Stegun, both veterans of the New York table office. They recruited about 30 young mathematicians to write chapters. In 1958 Abramowitz died suddenly; Stegun saw the project through to publication in 1964.

The Handbook seems an unlikely best-seller, but the U.S. government has distributed more than 150,000 copies, and editions from other publishers are estimated to bring the total copies in print to something near a million. (As a product of government work, the Handbook is not covered by copyright; there are scanned versions on the web.)

Announced last week is a new Handbook, officially retitled the NIST Handbook of Mathematical Functions. The ink-and-paper version, which I have not yet seen, is published by Cambridge University Press. Perhaps even more interesting is the web edition, called the NIST Digital Library of Mathematical Functions (DLMF), which I have just begun to explore. It is recognizably the same book as Abramowitz and Stegun, with the same terse style of presentation. But much has changed. The hundreds of pages of tables are finally gone; this is not the place to look up the sine of 23 degrees. But there are handsome color graphics now, and a new emphasis on methods of computation, including pointers to recommended software. And the selection of topics has expanded somewhat. For example, there are new chapters on the Painlevé equations and on functions whose argument is a matrix. Elsewhere, the Lambert W function (a personal favorite of mine) is a newcomer to the chapter on elementary functions.

Apart from the content, the DLMF is interesting as an experiment in presenting mathematics on the web. It’s the most ambitious project I’ve seen based on MathML, and it seems to work well, at least when viewed in recent versions of Firefox. (In other browsers I’ve tried, MathML gets garbled, but the equations can be displayed as images and are still quite readable in that format—even with an ancient version of Internet Explorer.) Here’s part of a page as seen in Firefox: 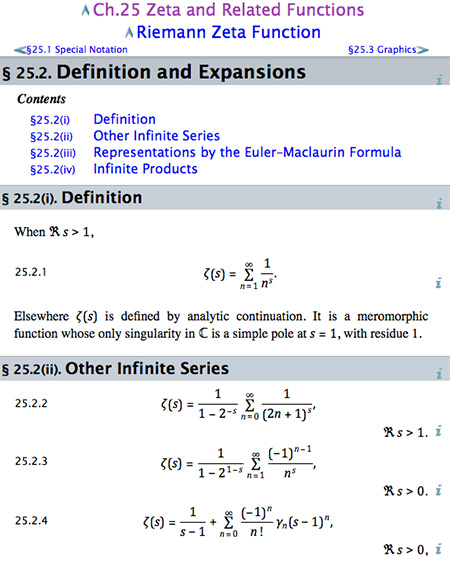 Mousing over the “i” icon at the right margin provides access to encodings of the equations in MathML or TeX and as PNG images, as well as definitions, cross-references and such. Very slick.

The editor in chief of the new Handbook is Frank W. J. Olver of the University of Maryland College Park and NIST, whom I have mentioned before both here at bit-player and in American Scientist. As a young mathematician, half a century ago, Olver wrote one of the Handbook chapters on Bessel functions. (As an even younger mathematician, in the 1940s, he worked with Alan Turing at the National Physical Laboratory in Britain.) There are three more principal editors: Daniel W. Lozier, Ronald F. Boisvert and Charles W. Clark, all of NIST, as well as a long roster of associate editors and domain experts. It’s too soon to say whether some combination of these names will eventually replace the moniker “Abramowitz and Stegun.”

Notes: The quotation above from David Alan Grier appears in “The Math Tables Project of the Work Projects Administration: The Reluctant Start of the Computing Era,” IEEE Annals of the History of Computing, Vol. 20, No. 3, 1998. Grier has also written a profile of Stegun in “Irene Stegun, the Handbook of Mathematical Functions, and the Lingering Influence of the New Deal,” American Mathematical Monthly, August-September 2006. Boisvert and Lozier have written a brief account of the history of the Handbook. (Oddly, the images in this PDF file are negatives.)

2 Responses to A new Handbook